So last weekend while Rob and I were enjoying our weekend in DC, Rob’s production partners of One Stuck Duck were using our living room to build the set for the upcoming shoot of thier music video. Rob’s brother Josh is a musician, so OSD is making a video for his song, Test. This will be another Live Action / Animation short. See here for their other work. The video has giant robots in it, the robots will be animated the drivers will be Josh and Eric. So in order for them to have something to drive, I came home on Sunday night to find a messier version of this. 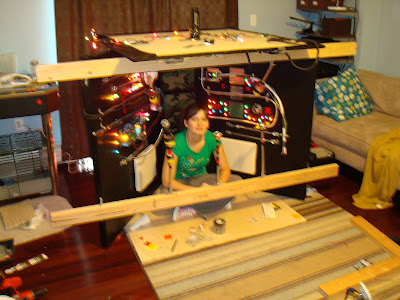 I say messier because Rob has spent the last few days adding elements – like the levers and lights – so that the pile that was on the carpet in front of the set is now nearly gone. It take up most of the room. We can’t really sit on the couch. I can only see half of the screen that shows me tv. The table is next to the bathroom. The ottoman is against the wall on its side. The rabbit is totally freaked out because his running space is blocked. I’m not complaing really. But oh, will I be happy next week when this is dismantled and put away. What do you do with a giant robot cockpit you ask? Well return as much as possible. Use the wood to block the air conditioner holes that dont’ have units yet, put the rest on the sidewalk, and hope for a really truly awesome music video that will win awards and make us famous beyond our wildest dreams. Ok, not really the last part, but come January, there should be a pretty awesome video.

Now if you notice I am sitting in the giant robot cockpit, because, well, if it is going to be in my living room I am going to play. Here are some photos Rob took of me driving the robot and singing my version of the song into the disco ball microphone. That part I might have to keep. 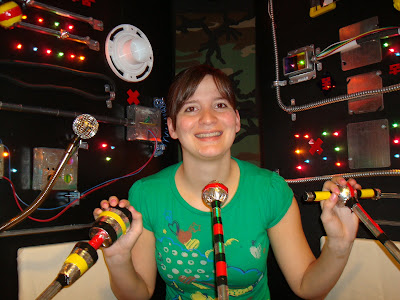 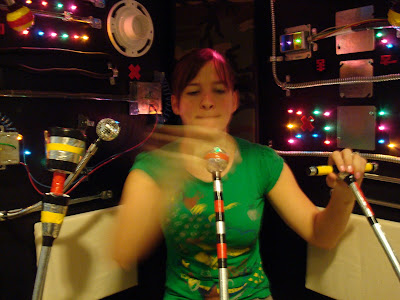 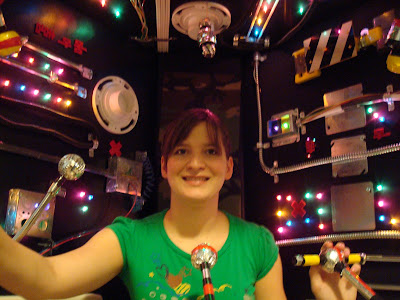 Tomorrow is the big shoot. I plan on being out of the apartment all day to keep my sanity. But when I return creative genius will have been at work. As my dad told me, it could be worse, Rob could be building a race car or montser truck in the garage.

One thought on “Robot Set vs. Living Room”