I use kaseykakes, so baby can be babykakes, at least until we find out what the gender is and we can come up with a real name.  I am 18 weeks, so almost halfway done (for those not in the know – pregnancy lasts 40 weeks, for those who don’t like math – I’m 4 months along).  This picture is from last week.  I feel like I look pregnant.  None of my clothes fit.  I’ve been in maternity jeans since 14 weeks, I have one old low rise pair I can still wear too.  Just this week I noticed that none of my shirts are long enough.  I have a small stash of maternity tees that I bought a few weeks ago, and lucky me I have a friend who is passed on a few more things, so I now have about a weeks worth of clothes. 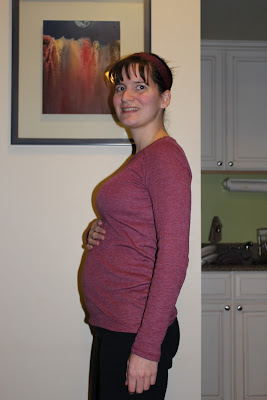 Stats:
Weight gain: so far is about 4-5 pounds.  Around 7 if we start from the lowest weight during the weeks of lots-o-throwin’up.  This is on the low end, but my doctor assures me is healthy and ok.
Sickness: It’s not the nausea or the “morning sickness” so much anymore.  That’s gone.  However, I still have bad motion sickness.  Which is usually ok, except that I work in Staten Island two days a week and one leg each way requires a car or bus.  Last night I threw up in Brooklyn.  One reason I prefer cars is there is the opportunity to pull over
Food:  Everyone keeps asking me about cravings or aversions.  And really not much.  If anything I kind of have an aversion to all food most of the time, or at least nothing sounds good when I think about it.  But I eat what is put before me.  Rob has been doing a lot of the cooking.  I may be coming out of this though.  The last few days I’ve actually wanted to eat.
I’m still sleeping a ton, or not sleeping as I wake up most nights trying to get comfortable.  No nesting yet, but I have most of the essentials picked out.  Nothing bought yet.