*This one from the draft archives; I wrote a draft of this post shortly after the event. Finally finishing with pictures a year later. (Also, forgive me for the blurry pictures. Due to a lost camera I have very few from this day. 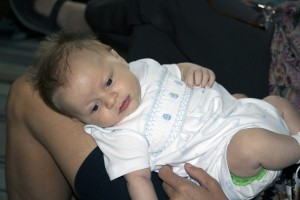 I grew up attending a Baptist church.  We don’t baptize babies. I was baptized at 13 when I made my confession of faith.  Rob, being a lapsed Catholic (and half Jewish) was baptized as an infant.  However, for the past few years we’ve been attending a Presbyterian church. In my church membership class we talked a little about baptizing babies and why it’s done in the Presbyterian Church. Because I am a church member I wanted to baptize Simon, and Rob was ok with that. 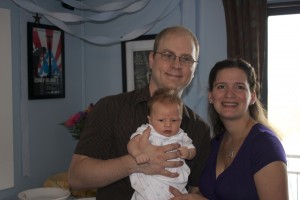 I really enjoyed the conversation we had with our pastor about why we baptize babies. The quick explanation is that we baptize the baby assuming that he will choose to follow the faith he’s been raised in.  We can’t however, presume this, because he might not choose this for himself when he is older.  We baptize because we teach our children to pray “Our Father,” but if they haven’t been brought into the family how can they say that? 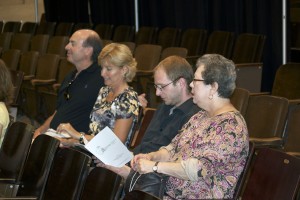 We set a date and Mom and Chip and Val and Josh all came to church with us. Not growing up with the tradition I thought this was going to be mostly a ritual that was part of the church I belonged to. But when we were in front of the congregation affirming the promise to teach Simon to love the Lord, I got a little teary-eyed. And Rob got to name his son. It was a special day and I’m so glad we did it. 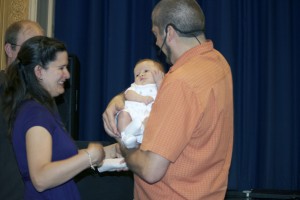 And then there was the after party: I made chicken salad and cake with marshmallows.  I hung some streamers and pulled out the fancy tablecloth.  We made iced tea and berry lemonade. At only seven weeks after having a baby, I think it came together nicely. 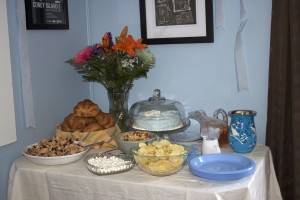