So as you can see in the tab above I’m putting these house tour posts together as part of the who needs it? challenge to get organized and de-clutter. The goal being to make home feel homey and not an anxiety or rage inducing mess. While this is a year long challenge for SRB I’m accelerating my timeline to tackle some of the big things NOW. And I’ve been working on it for a few months. Today though I’m participating in Challenge #1.

When I first read this challenge I thought I had it covered. I had showed the rooms that needed work in video. I’ve been working on these. The video was taken just after the apartment had been cleaned, but there was still a lot of work to be done. Then I started reading the comments and SRB’s post on defining clutter and I realized that there are some smaller areas that need work to. I had just stopped seeing them, you know because of the exploding bathtub and all. Places like behind the couch are “in progress” and I’m not so worried about these. Re-organzing the kitchen cabinets is a semi-annual occurance, although the cup cabinet and pantry cabinet are due for some TLC soon. Rob just go rid of several years worth of magazines and a HUGE bag of random cords and cables, freeing up shelf space. So yay! homeless things are slowly finding homes. I’ve mostly gotten the dining table under control. So the places I found that I want to work on are 1) my bookshelf, which I use as a vanity; 2) my dresser, which is perpetually covered with the clothes I wear often; 3) under the sink in the second bathroom, where I keep my make-up, nail polish, hair stuff, and extra toiletries, and I am sure much can be tossed; and 4) my desk/desk chair, which becomes my dumping ground and rather than put things away I move them then move them back.

For this challenge I decided to show and clean the book shelf. Here is a shot from October. I’m happy to say all of the spackled dots were painted back in October after being that way for a YEAR after we flipped the room to accommodate Rob’s desk (previously in Simon’s room) and had to move pictures around. You can see the mess on top, but also all the stuff crammed in on top of the books. 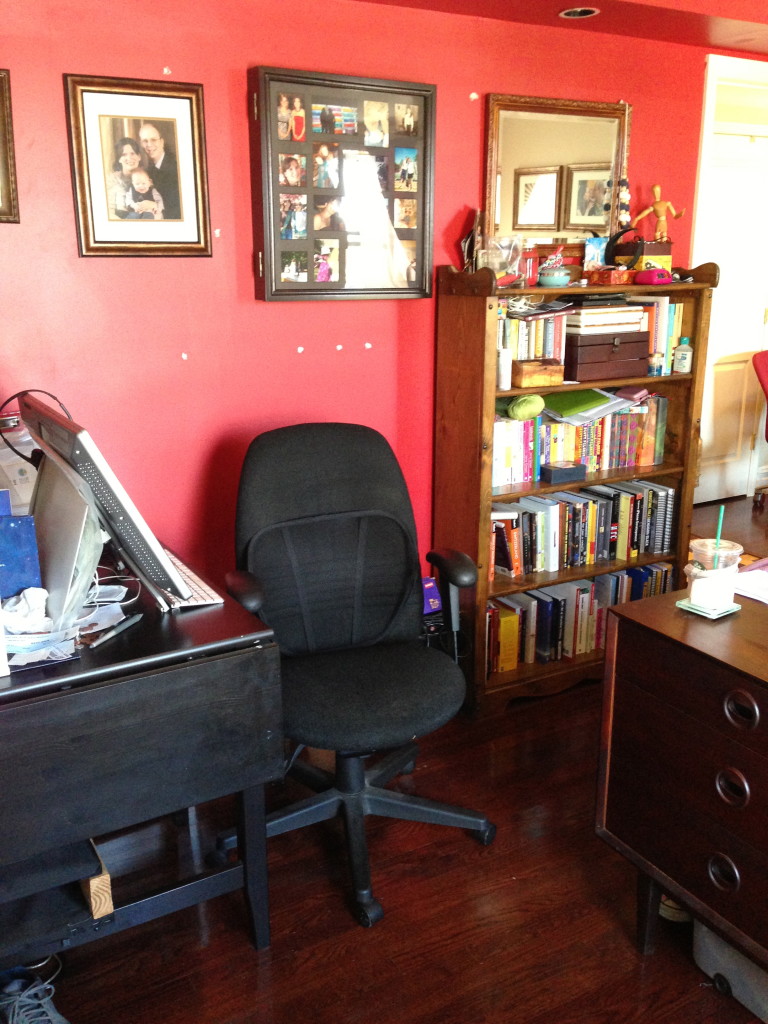 This is the close up of the top shelf, where I keep my stuff. 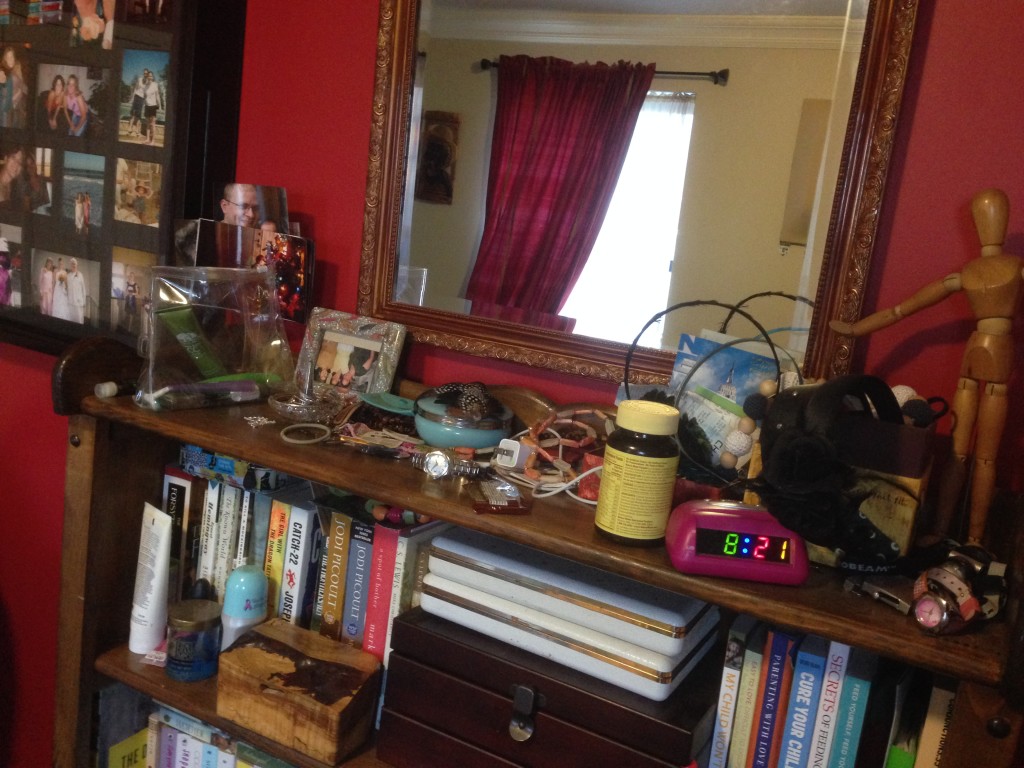 But once I took everything off the shelf, I realized I really needed to deal with ALL the stuff. Some of which I’m happy to say had already gone away as I am pretty good about purging books. 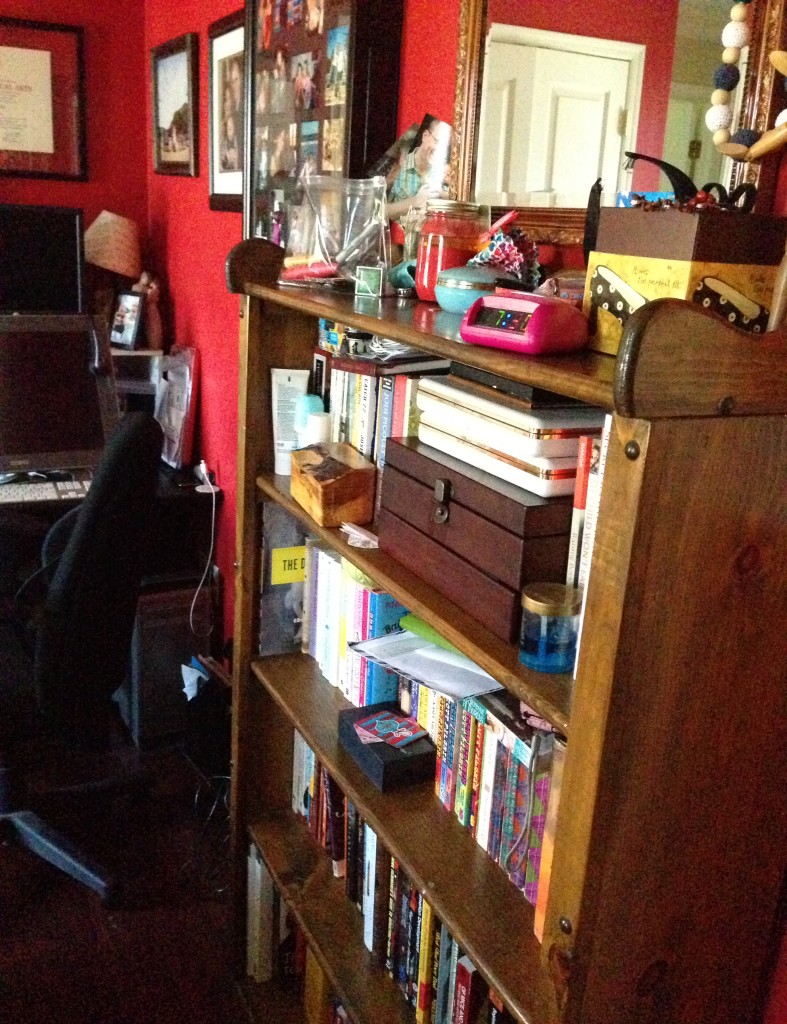 And HERE is what all that looks like in one place. Uncensored. 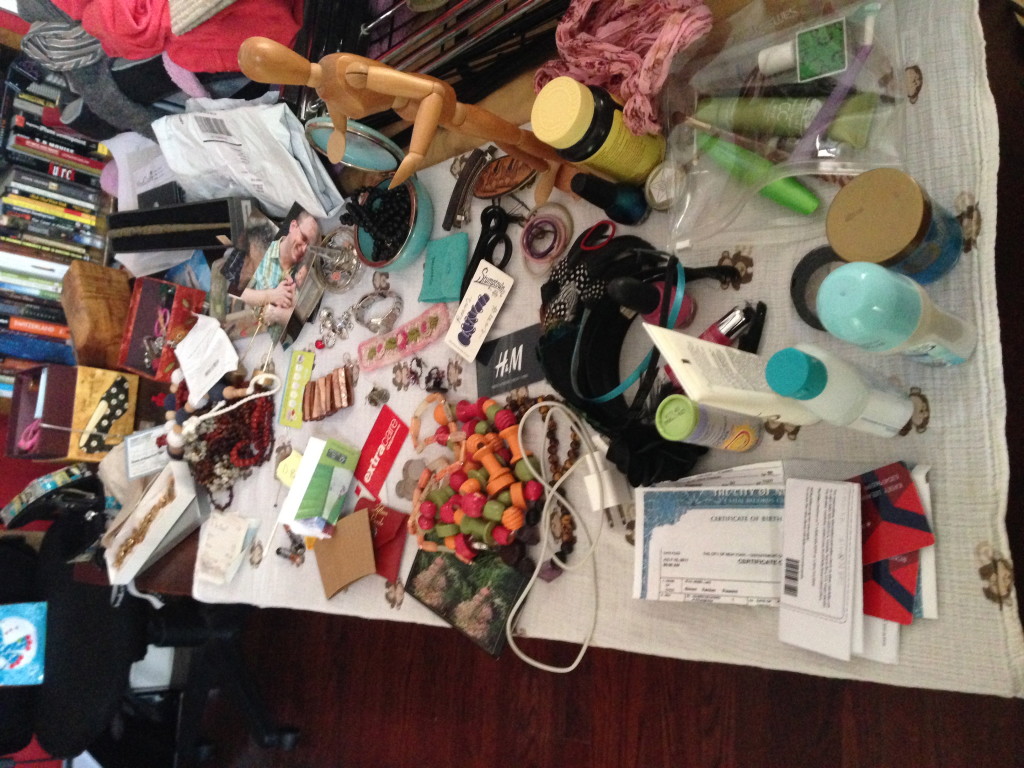 THIS is a bit stressful. And also enlightening. AND I found some things I thought were gone forever. What do we have here: a box of stuff I have no idea because I never use anything in it; travel jewelry box with some hair pins I thought I’d lost and some pearl earrings; my pocket watch from my Grandpa, the top of the box which is supposed to be for my daily “stuff” but is too full of jewelry and hair pins and rubber bands to be useful; my WAND from Harry Potter World; some empty and torn shipping envelopes (WHY???); photos, a pile of beads that are too bulky for the jewelry box; ring stand and small box from my Grandma’s house that holds my daily jewelry; “sometimes” jewelry that never made it “home”; pile of trash; assorted hair clips and bands; broken jewelry; assorted gift cards; nail polish; headbands/fascinators; vitamins; daily (and other) make-up; frequent flier cards; copy of Simon’s birth certificate; more trash, and jewelry cleaner. I think that is everything. Some, maybe even most of this actually DOES belong on this shelf, but it’s so buried under other stuff I can’t really find anything.

So I dusted and started putting things away. And I got the shelf to a place that made me happy. It was functional with the things I actually use on a daily basis easily accessible. My special pieces like Grandma’s boxes on display and no trash. 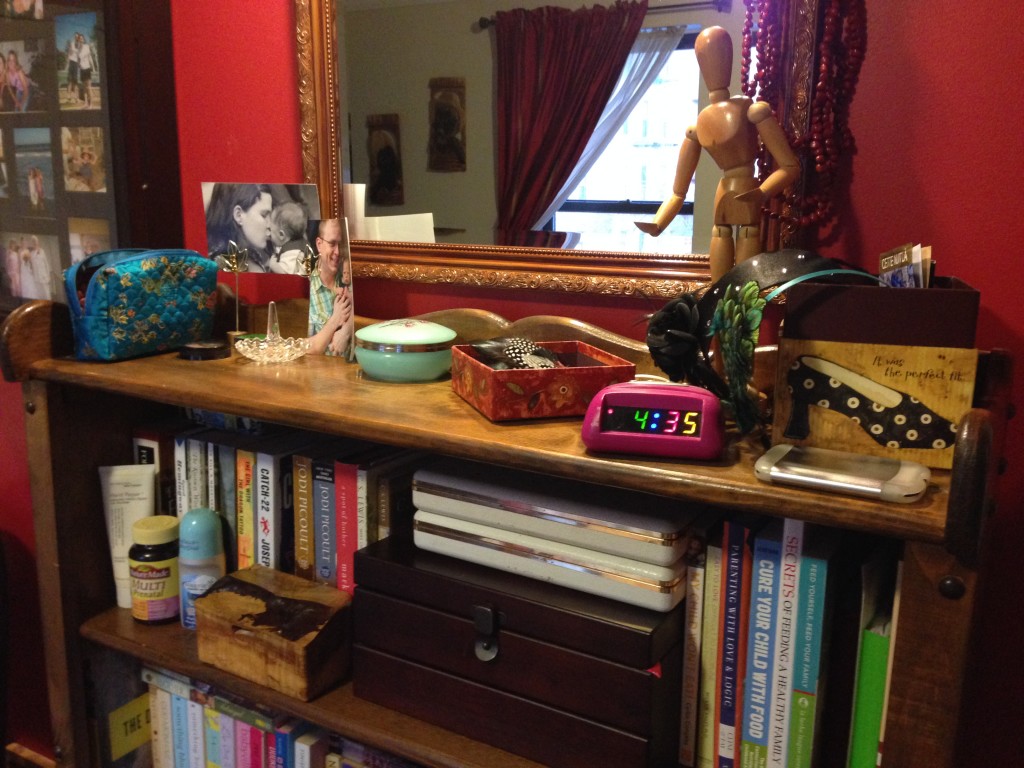 My daily make-up is in a pretty bag. My two favorite photos are on display. My wedding rings and the two pair of earrings I wear most often are on the ring stand and the blue box holds my watch and bracelets. The orange box lid holds my most used hair stuff. The big box holds perfume, chunky beads, and headbands. Vitamins, lotion, and deoderant are on the first shelf next to my puzzle box that holds buttons. Homeless jewelry belongs in the three boxes on that shelf or in the “hidden” picture frame box to the left of the shelf. But after all this – here is what I was left with. 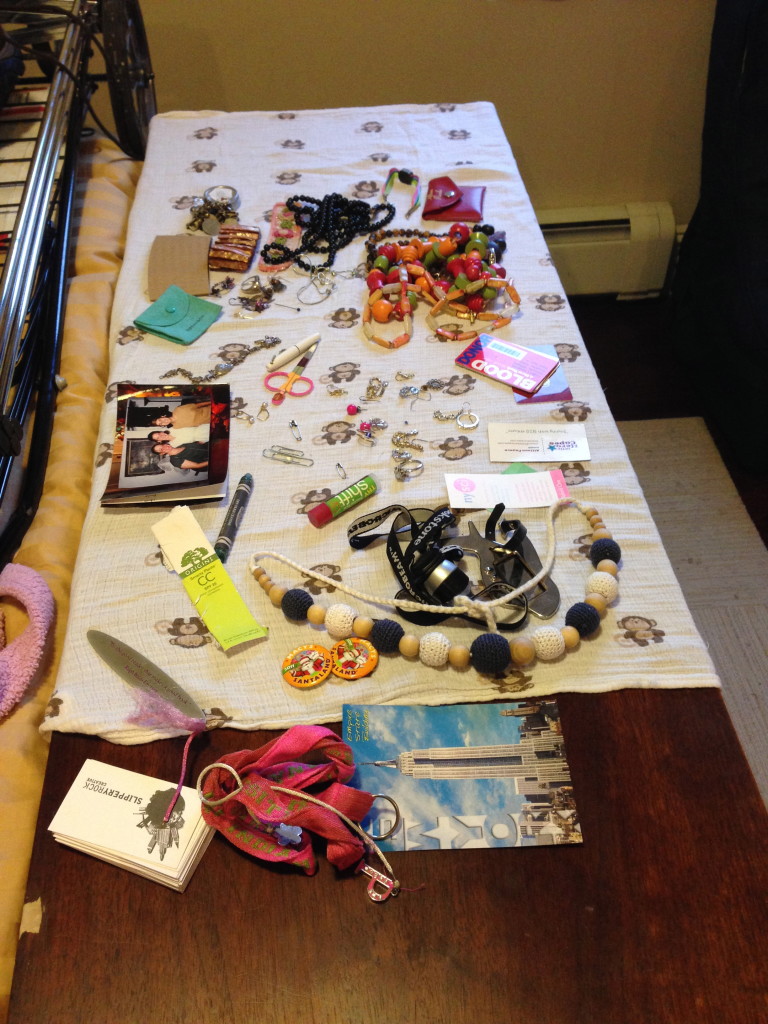 Most of the jewelry was easy to put away, but the rest? I now have a small bag of “stuff” that needs to go somewhere but I just ran out of energy. It will either get dealt with or move to one of the nooks where crap goes to die until this de-cluttering of mine uncovers it again. The process was very “If you give a mouse a cookie” for me in that once I put things on the shelf, I had to put things away in other places. All of the random hair things and nail polish and extra make-up belong in the bathroom in the under sink drawers. But while I was putting it away I might as well clean out the drawer – since it’s apparently mostly empty. I tossed a LOT of old make-up and broken hair bands. There is still work to be done there, but I started. Broken jewelry needs to be fixed, and desk thing got moved to my desk, but then I saw all the clutter than had built up there and… Well there is now a bag of desk files that need a home or to be trashed or to be filed. 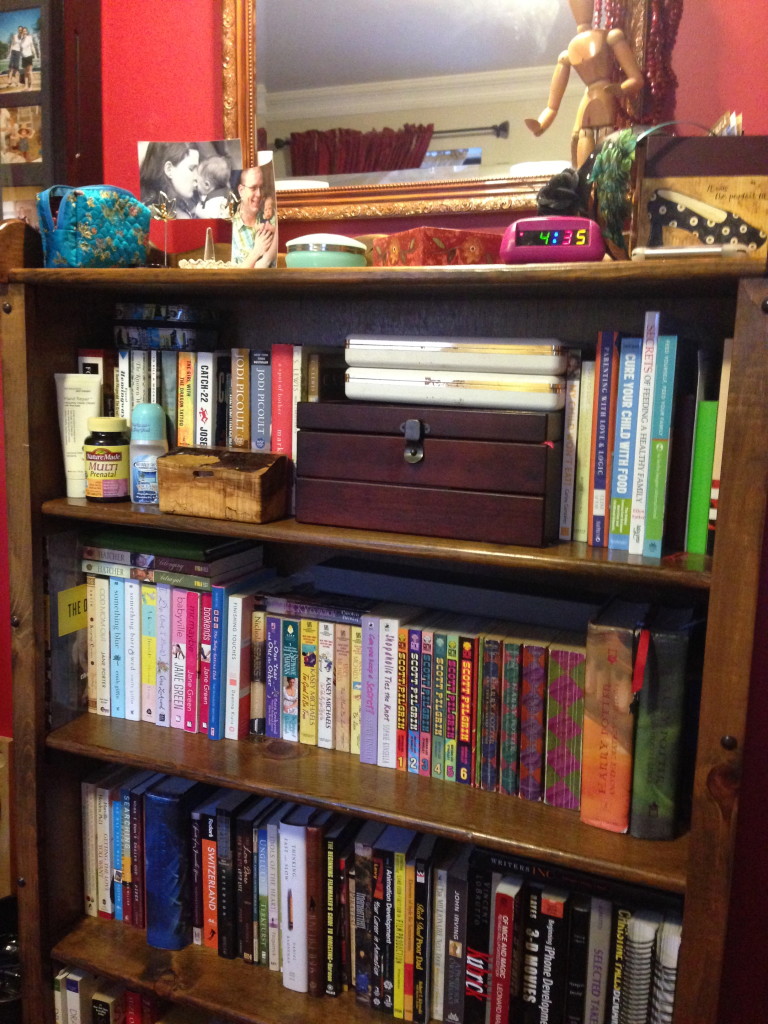 I really had just stopped caring about the mess because in some ways it is the smallest on the list of priorities. But it was also a few hours that made a big impact. Every time I see our apartment clean and “empty” – because we move a lot of surface clutter to the bed and floor clutter (strollers, car seats, etc…) to the hall when we clean – I fall in love with our apartment. Then the “things” come back in. It is definitely going to be an ongoing process to clear the clutter and find innovative ways to “hide” the things we really do need to keep around.

My mom will attest to the fact that as a child and teen I kept EVERYTHING and was prone to spreading my belongings out throughout the house. Since college I’ve live in smaller spaces and I’ve gotten pretty good at keeping the mess contained. I’ve also gotten less emotionally attached to “things” so I do purge. But I could do more; I need to do more. This challenge wasn’t emotional in that I had to really purge – it was mostly caused by laziness, but I did think about WHY I let it get this way and I want to do better.

Bring on challenge #2! And my continued organization and house updates which we can also call nesting.