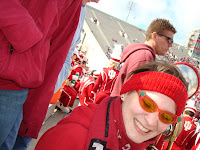 Last weekend was IU’s homecoming. And in true Hoosier fashion I drug my new husband all the way to Indiana to experience this one of a kind college experience. Rob having gone to SVA never got to go to a college football game. And while IU is not the best place to be inducted to the sport the team pulled off a win, an upset even (as Northwestern was close to being ranked). I think Rob had a good time, although he doesn’t quite get the whole band thing. Because geek that I am, of course I play in the alumni band, and as Rob knows no one else, he got to sit with the band.

I think the baffling part to him is that we talk and catch-up with each other and play a little bit, and it all just kind of happens to take place at a football game. Of course thinking you know you are going to lose doesn’t make you want to pay much attention to the blood bath on the field. However it was a good game, so once this was realized I started watching…some. I really do like football, it’s just that I like my friends who I only get to see once a year a lot too.

In addition to the game we ate a lot. Unfortunately for Rob all the eating and drinking was with my friend’s who’s husbands / fiances were unable to come. so Rob and four women. Lucky for Rob he’s a good listener and lucky for us girls, we don’t really notice when he’s watching tv. WE hit the best places. Mother Bears Friday night. We’ve learned you’ve got to his this one the day BEFORE the game, because after the game it’s a madhouse. Then after the game Saturday we went to Nick’s. This was also a madhouse and quite a wait, because you can’t squeeze five into the tiny booths. So we had to wait 45 minutes or so for a table. (This may also be a madhouse, but since it’s 21 and over not quite as bad as Mother Bears – which is family friendly) Then after a little shopping trip to Greetings for our annual t-shirt buying and Urban Outfitters because hey why not, and Rob had an incident (ask him) we headed to Bears. Where Rob tackled the Hairy Bear. I think he’s fully inducted as a Hoosier now.

Here are some videos Rob took of the alumni band. Kaylene, Sara, Carrie, Mom – if you have pictures of us can you send them to me please.