Friday was the opening night party at the Coney Island Film Festival, which takes place (obviously) at Coney Island.  What makes this festival unique is the fact that is comes with a sideshow.  Rob says it’s the most fun of any festival he’s attended – and we went to Cannes earlier this year! (Which was awesome in a completely different way)

As part of the party we were privileged to attend Burlesque by the Beach and get a taste of some of the different kinds of acts that take place here.  The Burlesque is in the back room of the Coney Island Museum, and there is a stage with some wooden bleachers.  It felt like a circus in the 1930’s where some seats were set up in a tent.  It’s part of the vibe that I love about Coney Island.  The show was hosted by the Great Fredini, who kept us going with magic tricks and illusions.  And some sword swallowing.  That was impressive.

In the first half of the show we saw Serpentina, the snake charmer (and also our bartender)

Aci, who is one member of Tokyo Delores and her ariel act.  This was also very cool. 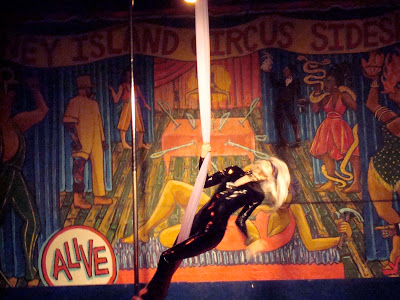 And the first have closed with the delightful Miss Tickle.  Her Burleque was entertaining.  The feather panels on her skirt are all removable and she used them like fans. Then at the end she attached them to her arms and was like a bird flying around the stage.

After this all of the filmmakers in attendance were invited to the stage to tell about their film.  So Rob got to speak on the Burlesque stage.  He did good, he remembered to say his name, the film name, and when it was playing.  All the important details.

After an intermission which seemed to go on FOREVER because it was now 10:30 the second half started.  I didn’t take pictures during the acts because I was tired.  But we saw another burlesque dancer, Bambi the Mermaid in her lobster (or was it a shrimp) costume.  It made me giggle, and the song she danced to was funny too.  We saw all three members of Tokyo Delores in their acrobatic act, and the fire eater.  She was awesome.  I can’t remember her name, but she had some crazy tatoos.  And Rob got a picture with her before we left.

Rob’s screening is today (Sunday) at 3.  It should be fun.  I am bowing out of attending so I can get my school stuff done.  But maybe he’ll win a prize.