People have been asking me if I have food cravings.  And I really haven’t, at least not more than the usual, I’m hungry and this sounds really good and that’s what we NEED for dinner kind.  But there is one thing.  I’m not 100% sure if it’s pregnancy related or if it stems more from the fact that Eatery stopped making their Southwestern Fried Chicken Salad, I have been looking for good fried chicken.  It’s one of those foods that is just too hard for a small kitchen, there would be grease on EVERYTHING.

Today Rob went into the city and Brooklyn to run some errands with me.  At the end of it, we were picking up a something from a friend and thought we’d ask them for a lunch recommendation in Greenpoint/Williamsburg, where we were.  We were looking for a fancy coffee shop that served real food too.  The original plan was to go for coffee, but we were out longer than anticipated.  We were sent to Brooklyn Label.  Where they have Fried Chicken and Waffles. 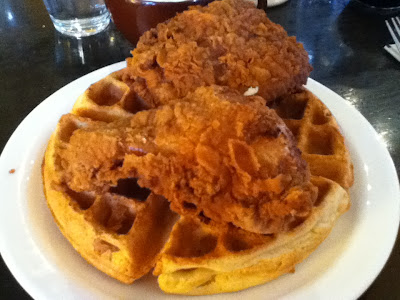 This dish is called Harlem Style Fried chicken and Waffles.  I remember first hearing about it at a preschool in Harlem, when we asked the kids what they liked to eat at restaurants.  I kind of almost didn’t believe them that it was real.  Since then I’ve heard more about this dish.  But still it never piqued my interest enough to find a place that had it.  But with my recent hunt for fried chicken, I thought I’d give it a try.
*Brief aside: you can get fried chicken in plenty of places, but it’s Korean fried chicken, which just isn’t the same as Grandma’s.  This fried chicken is southern fried chicken, just on a waffle.
At first I was going to eat the chicken, then put syrup on the waffle.  But a little bit of maple syrup on fried chicken is kind of delicious.  I don’t know how I’ve never had this before. 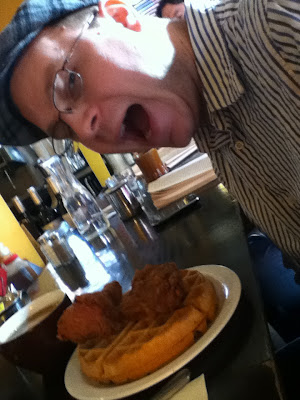