Tuesday’s massage was lovely.  I had no idea how sore my upper legs were until she started working on them.  30 extra pounds will do that to you I guess.  The downside was that My leg muscles were so relaxed that I had a hard time standing or walking the rest of the day.  I have since built up some strength again 🙂

Wednesday I went into the city to meet Rob and go to the Harry Potter exhibit at Discovery Times Square.  The exhibit is lots of costumes and props from the movies.  It was a little underwhelming only because since Rob and I both work/have worked in film we wanted to know more about how models were used and effects were done rather than just read “this thingamabob was used by so-and-so in X movie”  But we had a coupon to go, and it was a nice evening.

No photos were allowed inside, but here are a couple out front as we were leaving. 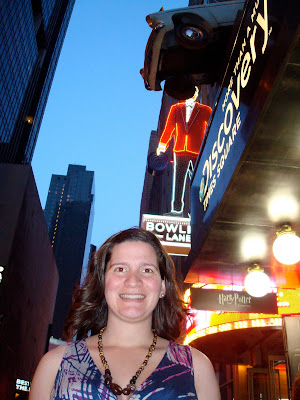 Afterward we needed dinner so we headed down the block to John’s Pizzeria.  This may be the best (thin crust) pizza I’ve ever had.  They cook it in a real brick oven.  And because it was right as the theater was starting and there were only two in our party we were seated quickly.