Look at this mug. He’s been charged with the crime of being a toddler – really. Sunday night the police paid us a visit. We didn’t call them. A neighbor did complaining of noise. We have a toddler, he likes to walk and play in his home. *Note: they came around 8 pm when they came (not the middle of the night). 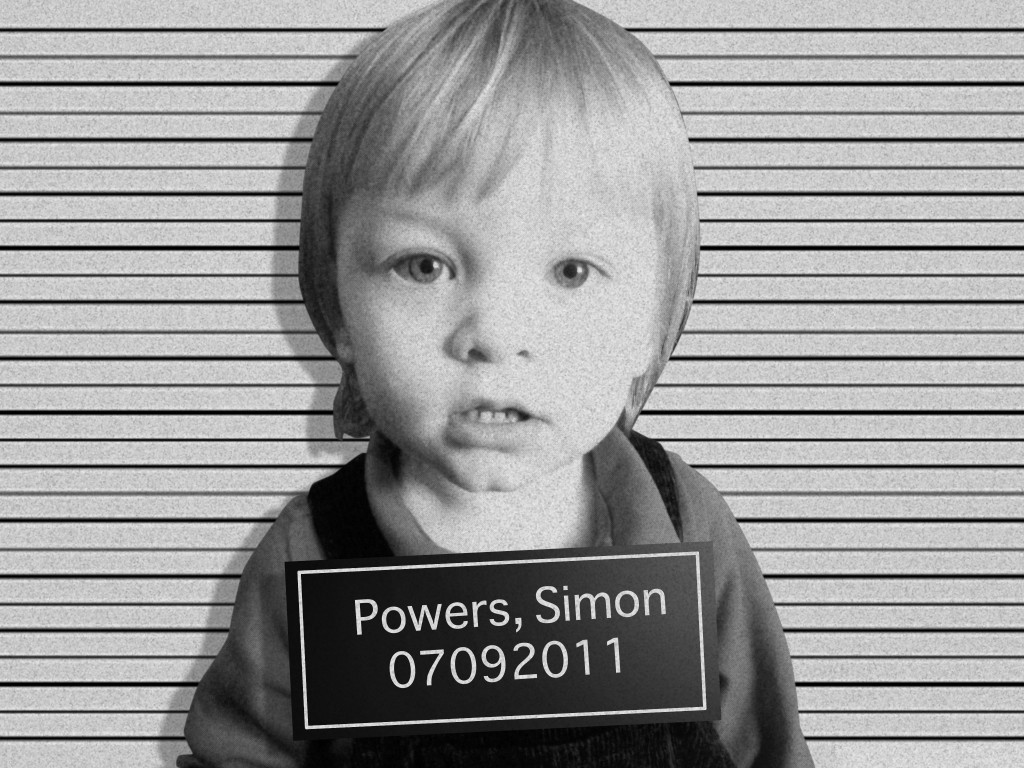 We’ve had problems with these particular neighbors for years, since way before the kid. They thought we were loud just the two of us, saying we were always moving furniture. We asked them if it was our surround sound, they assured us this wasn’t tv or music, but walking and moving of furniture. We turned down the bass anyway. We have always been a no-shoes house, so that wasn’t the problem. And we aren’t required to have full rug coverage, so we have never put them down in the walk through areas. Once I was asked to please not vacuum as that was too loud (around 7pm).

*Note: this couple is around our age. No kids.

Since Simon has become mobile, there have been a few more complaints. Namely running and throwing. I try to help him remember walking feet, but he’s ONE, so it only works so well. Short of carrying him at all times or leaving him in his crib, he WILL find a time to run, especially now that it gets dark so early and his outside time is so limited.

The throwing they complain of…well, believe me when I say I wish he wouldn’t throw things either. But again he’s ONE. It’s how they deal with frustration. Our rule is the first time we say no throwing and give it back. If he does it again he gets a warning. And the third time he loses the object for the rest of the evening. But he has a lot of toys, and we have a lot of non toys (plates, forks, cups, books, the remote) that means there can be a LOT of throwing if he’s in a mood.

We bought a larger rug, and put padding (which I hate because the rug slides) under it. We aren’t going to do wall-to-wall carpeting so this is the best it will be. Keep in mind too that Simon discovered the difference between hard and carpeted floors at about 5 months, so if we did have full carpets he would just play in the kitchen or bathroom…

Sometimes when we are cooking he pulls out the tupperware (we’ve finally got him away from pulling the pots and pans) and that is too loud – but you know what if he’s not screaming and pulling on me while we try to get dinner or do dishes I’m ok with it. And sometimes I will go to the bathroom and he will throw things at the door – but I’m allowed to have 60 seconds to takes care of business, so I’m ok with that too.

Simon goes to bed between 7:30 and 8 most nights. And when he wakes up in the mornings we keep him in bed with us reading books or having ipod time until 7 during the week and 8 on weekends.  I think this is reasonable and that we are allowed to live in our apartment and do things like walk and play and clean without harassment. I mean we aren’t blasting music late at night or throwing crazy parties.

The ceiling/floor pounding on Sunday was for walking in a circle pulling a wheely lion pull toy before bed at 7pm.

*Side note: the complaint could have still been for the surround sound as we did watch The Avengers after Simon went to bed (just assuming not since we’ve been repeatedly told it’s NOT the tv). To make sure we put padding under the sub woofer and adjusted bass again.

So you, my internet jury: should Simon be punished for the crime of being a toddler?

In all seriousness, I’m not the unreasonable one am I? Am I missing something I should be doing?

2 thoughts on “a brush with the LAW”