Since the beginning of the year (for reasons of daycare fee scales) Caleb has gone to daycare on Fridays and Simon has not. We’ve used the time to go on our Adventures around the city, because at nearly and now officially FOUR, we can do things that are just not fun with a toddler in tow. And it’s nice for Simon to get some one-on-one time. Last Friday I had a few errands to run in the city, so we went. Simon was very good at our multiple stops, the last of which was the main Public Library Building to meet someone and drop off something.

Simon wanted to go in and check for Ghosts. Unfortunately the two areas of the library featured in Ghostbusters – the main reading room and the stacks – are currently under renovation and unavailable for view. However, in the Children’s Library in the basement Mary Poppins is back on display while the Pooh Toys are out for cleaning. Simon does not know about Winnie the Pooh, he does know about Mary Poppins. He liked the umbrella, but was disappointed Mary Poppins herself was not there as well. We also happened upon an in progress story hour, which Simon begged to join. I was impressed at his ability to sit with a group of much older kids and listen along.

Then we headed home to pick up Caleb for an hour at the Hall of Science. On the way I realized that it was our last Friday. The last Friday adventure before Pre-K starts. This week we will be on vacation then I start teaching the next two Fridays. Then Simon enters the NYC public school system. Mel wrote about lasts a few months ago – the lasts we know about and those we don’t. I’m not sure I got around to commenting at the time but the post has stuck with me. This one, I’m glad I didn’t realize until it was in progress. If I had I would have ruined it by building expectations and forcing fun. Instead we were able to have a pretty good day doing normal things. I still can’t believe I only have one more week of “summer”. 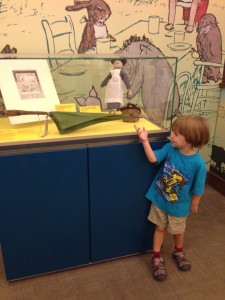 One thought on “#MicroblogMondays: Last Friday”