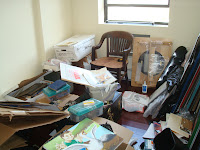 When Rob first moved into the condo, the small bedroom / office looked a little like the picture to the left. Or maybe that’s exactly what it looked like. The room was full of furniture we weren’t sure what to do with, the artwork waiting to be hung on the walls, and boxes of stuff from the storage unit where Rob put the things from Uncle Al’s house. We spent a couple of months cleaning out this room to make it a respectable office and now guest room. In the process there were all the family photos to deal with. There were thousands of photos and slides to look through. Rob was at first tempted to just toss the lot, but instead we sorted. The photos from Rob’s childhood, and his Dad’s were all put into a box. Along with slides of family events that someday we may have transferred. Tossed were pictures that were blurry and out of focus, and there were a ton of nature pics of birds and such that also went. What we were left with was two photo boxes full of Rob’s family pictures. When we got back from New Mexico I decided to do something with them. 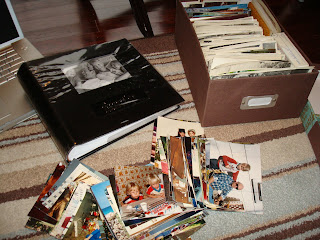 I had an empty photo album, so I went through the boxes and found the best 200 pictures. Then with my limited knowledge of chronology, dates on the back of some photos, and Rob’s really awful sense of time, I organized and made an album. The only downside is after I was all done I found the roll of Rob’s first birthday party, and there is no way I’m moving everything back to put them where they belong. So now we have a Power’s family photo album. I’m going to have to enlist Val’s help in labeling some of the people in the photos. I think I can get them all.
For my next project I want to print out the best of the digital photos from the last few years and put those in albums. I really love having them and that is the downfall of the digital camera.