Emily had an East Coast tour. Finally! And two weeks ago drove her 15 passenger van with it’s trailer from Chicago to NYC, where she had to find a parking lot that would let her park. She did, and then she came to see me. We walked and got chai tea lattes at Joe’s then went to Trader Joe’s to buy snacks, and some show shopping. Before she ahd to go am meet her peeps. Then she took her group down the coast (Philly, DC) and then across the smoky mountains to Nashville, Louisville, Indianapolis, Chicago and then back east through Amish country, Lake Erie, Niagra Falls, Finger Lakes, Boston and back to NYC.

Emily hooked back up with me on Saturday afternoon to drop her stuff off. She was still with one of the girls, Chin, who wanted to do some shopping, I sent them to Brooklyn. AFter that they were going to come back to Woodside, and Rob and I were going to take them all to the best Thai food in Queens. But Emily called me when she couldn’t get ahold of Rich, who was also joining us for dinner to let him know we’d moved the time from 6:30 to 8. So at 6:30 Rob and and I walked up to the subway and saw a tall guy in white shoes who looked lost and asked if he was Rich. He was, so we brought him to our apartment and let him use our phone and internet to find a hostel. He didn’t book in time and every room in NYC was taken. He was about to call the hostel in Jamaica (Queens) when we stumbled on a room in Harlem. Done. Emily and Chin join us and we did have the best Thai food in Queens.

Sunday Emily went to a museum with her peeps, and I did school. Oh, and Rob made us pumpkin pancakes in the morning. Sunday night we had sushi and then fell asleep watching the Colts.

Monday, Em and I had a Salon day. She bought one of these salon gift cards where you get a whole bunch of things, and it’s like half price. And the girl was really sweet and didn’t charge us extra for some of the stuff.

Here is the before picture: 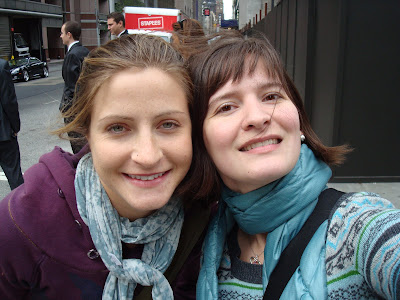 And then after two hours, two manicures, one shampoo and cut (Emily), one color and deep conditioning (me) two blow outs (who knew you had to pay more for long hair – we did pay that one) and the promise of a mini-facial next week (me) because the facial girl was off on Monday… Here is the after picture: 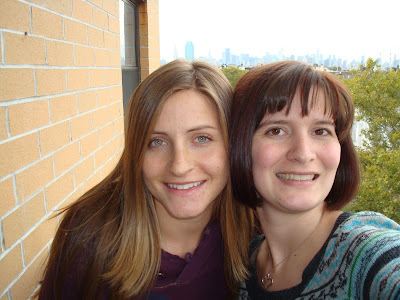 Emily’s hair is so long and swingy. And mine has red streaks (I told him I wanted fun)

And now I have to wait until Christmas to see my sister again.