Skip to content
*As I wrote this out, I realized that there are lots of extraneous details about the shopping trips and my strange emotional attachments to furniture, etc…  I apologize somewhat for the tangents, but hey, it’s my blog.
Evolution of a Room
chapter 2

I left off with the mess and the big job ahead.  By March I had cleaned and purged.  A lot.  The room looked like a room again. 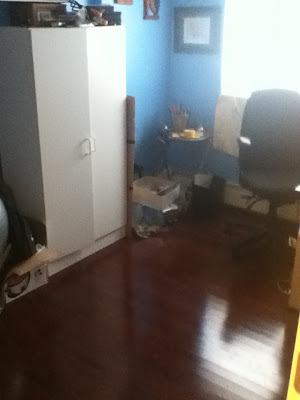 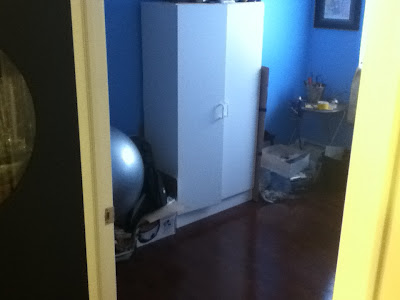 We planed a trip to Ikea.  And scored a great deal on a crib.  We had a big (not really) decision to make.  Which of the three cribs did we want.  It was pretty easy to decide on the closed end crib, as opposed to the one with slats all around.  It just felt sturdier.  Then we went back and forth on the wood color or white.  The dresser is not white.  We had to decide if we wanted the furniture to match.  Painting the dresser white had been vetoed.  Then we realized that the wood colors didn’t match, and that the desk in the room (actually what was originally going to be our dinner table and also from Ikea) was black.  So there would be no matching.  And Rob thought the white would look nice with the white shelves already in the room.  He’s the artist, so we went with it. 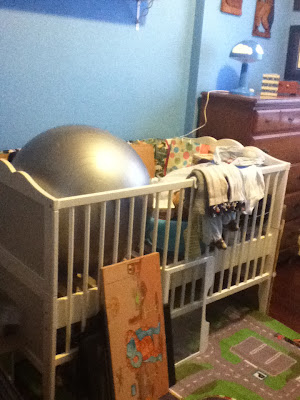 On the way out of the store we walked past the “As Is” section and saw two of our cribs sitting there.  As we were discussing if saving $50 was worth having to disassemble to get it home an employee heard us and asked if we would take it for $50.  This was now a billion % off or $90.  We went for it.  I think Rob got a little frustrated in the taking apart process.  And I think it was partly my fault, but I’m not a mind reader, and wasn’t very good at anticipating what help he actually needed.  We got it though and the crib was assembled in the room. 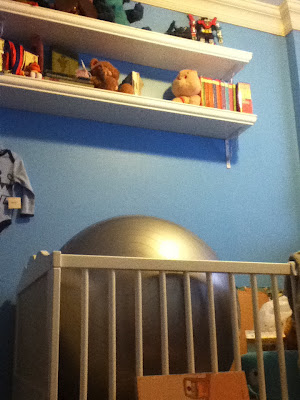 What happened to the utility cabinet you ask?  Well while in the store we ran into some friends who had recently moved into a house and were shopping for shelving for basement storage.  We asked if they wanted a cabinet, and DONE!  The cabinet had a new home.  So we now had to deal with all of the stuff that had been in there.  For now we put some of it in the crib and a lot in the bathtub (more on that in another post) and some of it on the new shelves we put up.  And quite a bit was trashed.  We are getting good at purging.

And on the way home we picked up the dresser.  This dresser has been mine since I was about 10.  When I lived at “home” there was a matching chest with a mirror.  Not really sure what happened to that one.  But this dresser, it moved with me to college and then to Brooklyn.  Then when we got married I passed it on to some friends, because i couldn’t bear to leave it on the street with some of the other furniture I left behind (my mom’s childhood bed – which was “luckily” broken beyond repair so we were able to leave it with minimal anxiety).  I gave it to them with the caveat “if you ever need to get rid of it or we have a baby we want it back”.  I had kind of forgotten, but was reminded that oh yeah, we don’t have to buy a dresser.  It worked out well because they had some other friends who were moving out of state and offered up any furniture for free.  It was a dresser swap. 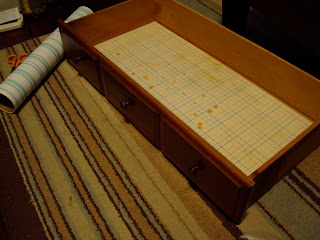 While at Ikea we made a round through the kid and baby section and I found this lamp.  It’s perfect because it doesn’t get hot, the light bulb is completely surrounded by plastic.  And the clouds glow making it work for a nightlight.  I’d been looking for something like this and here it was.

We had also been looking for a suitable rug.  The one I really really wanted and had been looking at for a year was discontinued sometime between Thanksgiving (when I knew I’d be buying soon) and Christmas (when I went to buy it at 12 weeks).  I was sad, but moved on.  So while walking through the kids area we saw these play mats.  For $10.  When the options are $$$$ for something you don’t really like or a playmat that is cute and will work for $10 you take the playmat. 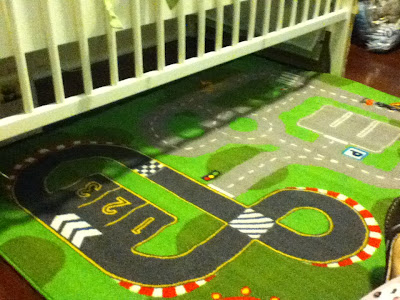 My Dad came to visit in April and helped with lots of little home improvement tasks that we needed to get done. (On this visit Rob learned about the “honey-do” list, ask him to tell that story sometime.)  One of the things was to fix the drywall on the formerly leaky window and to repaint. 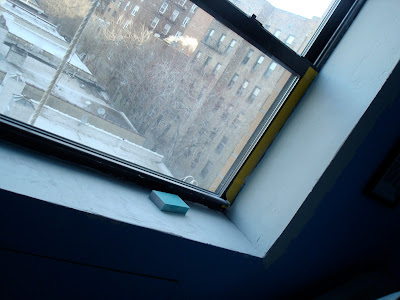 We also insulated the AC box in the wall below the window and hung additional shelving over and behind the door. 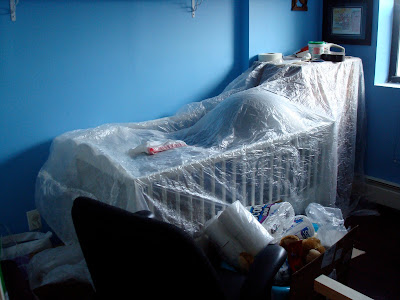 I just love how it always seems to be one step forward, two steps back with the stuff and the mess.
chapter 2.5
crazy pregnant brain
Once the room was ready I really had to think about decor.  Unfortunately for me (and Rob who had to listen) pregnancy brain made me a little crazy when it came to making decisions about things that don’t really matter.  Like baby bedding.  I found this bedding and thought it was cute.  My sister who is the absolute best bought it for me, not knowing I was having second thoughts. 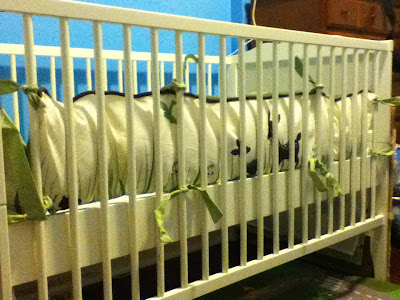 It is super cute with deer walking through the grass.  However, it doesn’t really match the rug or lamp.  And I was ok with that.  And white bedding with a white crib I wasn’t sure about.  It also didn’t match the artwork we already own and should use because we are out of wall space and are storing lots as is.  But Rob said it was fine, and he didn’t care so much about matching and we were going to go with it.  BUT, because of the solid sides on the crib, the bumper didn’t tie right. (I was going to use bumpers, I know there is lots of controversy about this, whatever.)  And the style of the platform for holding the mattress, it fits into a box rather than sitting on slats, didn’t allow for the skirt, so I would have had to heavily modify.  And you can’t use the quilt until they are toddlers.  So really I had a really expensive sheet.  Oh, the agony and anxiety I suffered over this.  It really made me crazy.  I think because I really do love this bedding.  It just wasn’t working for us.
Then I went to New Orleans with my Mom.  And I was telling her about the crazy.  And she really didn’t get it.  But I was wanting to work with what we had.  And Emily said it was fine if I returned the bedding. 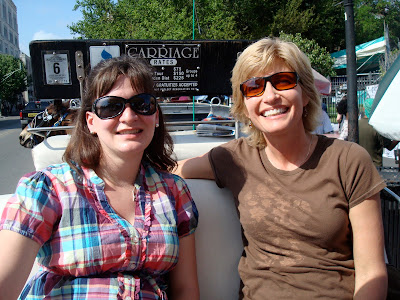 We have this pinball machine, turned table.  I’ve always thought it would make a great play table someday if we lower the legs.  Because someday Rob’s desk will probably have to move out and there will be room for a play table. 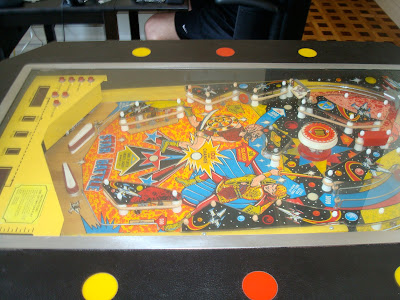 And we have the Robots Fighting painting in the third photo of this post.  And the blue and orange look nice, and work with the room color.  And we have the Monko animation cells form the living room that Rob did and would match.  So I was thinking a robot room could be fun.  And in NOLA we found this. 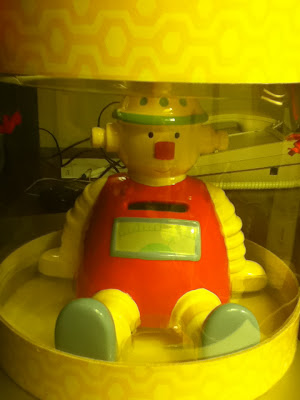 And how could I now not do a robot room?