This post has been a LONG time coming.  I took the first photos of the disaster area office / pre-room conversion in January.  But then it took SOOOOOO long to clean out that I felt it was embarrassing to never post the update.  There was a good middle ground around Spring Break where I made a lot of progress, but then the room was on hold again.  It’s been in good shape for a couple of weeks now as we are just waiting for Mr. Simon to arrive.  Today I took pictures of the after.  Here is how we created a nursery / office share in am approximately 8 x 10 room in our 700 sq ft NYC apartment.

Evolution of a Room
chapter 1

This room tends to end up as storage.  With only two people, the extra bedroom is a great place for storage.  Some of you may recall that this is what the room looked like when Rob first moved in back in 2007.  It’s where everything that wasn’t furniture (except the chair) or needed immediately (like clothes and dishes) went.  Over 5 months or so we sorted through this mess.  The artwork was eventually hung and the family photos sorted.  Around 3 months in, there was a clear enough space for the office to become an office and the desk and computer were moved in. 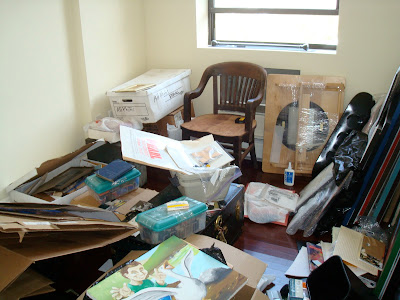 January 26 I convinced Rob to let me paint and the room became blue.  This was the same weekend he proposed!  (The proposal meant I would officially be living there soon, so I had the leverage to paint the whole apartment!)

The office was an office / storage space for about a year.  I moved in and the closet in this room became mine.  Then there were a few months where my brother-in-law lived with us and I gave up the closet and the office moved to behind the couch. 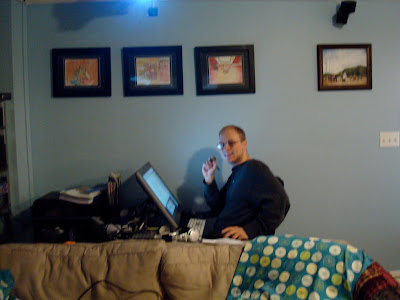 Eventually it was just the two of us again, and the room reverted to it’s office / storage room / closet status.  Again, I am a little embarrassed that at times there was barely room for Rob to make it to the desk.

Anything we didn’t know what to do with went in this room.  I don’t know how I got to my clothes.  I climbed?  Oh right, and I was pregnant when these were taken, and only had a few things that fit.  I kept them in the dresser in our bedroom. 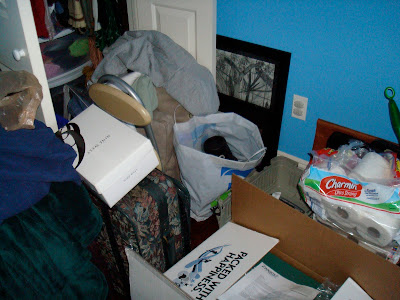 When we found out we were going to have a baby it was time to start thinking about another room evolution.  How were we going to make this work?  For starters, returning the Zappos box of shoes I wasn’t keeping.  I need to stop taking their 365 day return policy literally when I buy multiple pairs of shoes to try on…  We needed to organize our closet storage and start putting things away.  We needed to purge.  We needed to find a place for everything in the white utility cabinet that would be replaced with a crib.  We needed to do a LOT of work. 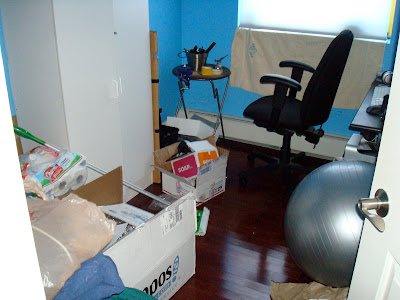 Next up – my baby’s room: the during

3 thoughts on “my baby’s room: the before”