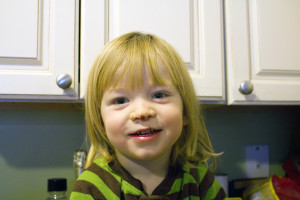 Oh wow! 2 and a half is here! 30 months! That seems so big. And it seems so long since I did his last “monthly update” at 2. He’s changed so much since July. And that wasn’t a true update, maybe I should do these more often. 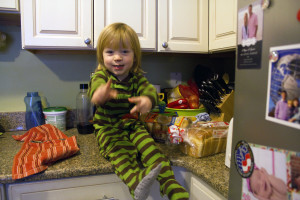 At 2.5 one of Simon’s favorite things to do is to “help” on the counter or on the step-ladder in the kitchen. Helping mostly consists of eating bites out of everything and making a mess. But sometimes he will pour from a measuring cup to a bowl without spilling or actually get the bread in the toaster. This morning he helped make his oatmeal and mama’s toast. Then because it’s a special day he helped put the chocolate syrup in his “regler” milk to make “special” milk. 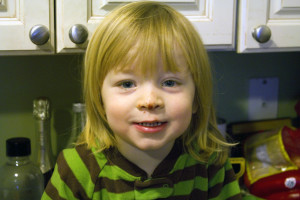 Before getting into other development I should explain poor scab-face. Simon has discovered pockets. Rob and I often walk with our hands in coat pockets so I guess it was only a matter of time. Monday we were walking home from school and he had hands in pockets. And then tripped and fell and well you see where this is going. With no free hands to stop him, face met concrete. There was a lot of blood. But other than a bloody nose and a cut lip the damage wasn’t too bad. We stopped in a store and got some tissues to clean up until we got home. Then I saw the scab-face. It’s healing. He’ll be fine. Now he says “no tripping with hands in my pockets.” 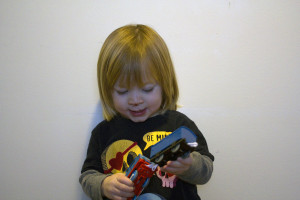 He talks so well in sentences now. Back in October he was talking in sentences but couldn’t have a conversation, now he can. Language development totally blows my mind at how fast it happens. In his two year post I guessed he had around 200 words, but he was in a language study shortly after that post which showed he had 356 of 680 commonly used words. This put him above average, and I know he has words that aren’t on the lists. Being my kid it should come to no surprise to anyone that he talks a lot. From a kid who spoke approximately three words on his first birthday it astounds me. He still has some work to do on using the correct pronoun and will often put nouns and adjectives and verbs in the wrong order, but these are common errors. He’s trying to use different tenses too. 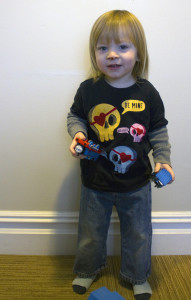 Simon is definitely a kid of the 21st century and prefers Facetime to a regular phone, but he does now understand that all calls aren’t video calls, even though he prefers them. And he will actually talk to the grandparents and aunts and uncles on the phone, sometimes even asking to call to show them something. 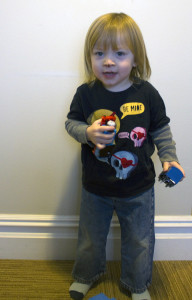 Depending on who you ask some would say he gets too much “screen time,” but as a developmental psychologist who has done research in this area and Rob an animator it really can’t be avoided. We are ok with the amount he gets. He loves his Leapster and has started being able to play the games on his own rather than just watch videos. I’m amazed at how fast he picks up a new game. One days he’s totally frustrated and the next – he’s playing independently. He also has “my phone” which is my old ipod touch. It’s set up with apps for him, Netflix, and YouTube. Netflix lets you have different accounts for a household, and Simon can log-in to his name (the yellow happy face) and watch his shows. He also plays a lot of matching and puzzle games which are fine-motor skills. He loves to color at school but not so much at home – possibly because of the screen but again I’m ok with that. 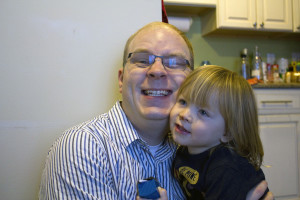 Lest you think all he does is have “screen time” be assured that he is still OBSESSED with all things trains and spends at least an hour on school days and more on weekends building tracks with tunnels and bridges. There are conversations with the trains. It’s so much fun to watch the pretend play develop. Then when he tires of that he will build a Lego (Duplo) tower around the tracks and have a Monster Truck Jam smash-up with total destruction of the structure. 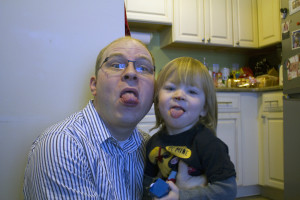 Simon has always been good with independent play and still is, but he likes to play with us too. But in a very specific if you don’t play as he directs you way then there is a melt down. With my crazy fall schedule we’ve had fewer play dates the last few months than normal, but he has his friends and likes to have them over. So we’ve added a couple of new friends to the play date rotation. 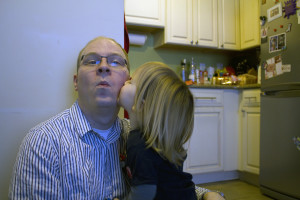 School is still so fantastic for him. At the parent-teacher conference last month (I love that we have these) there were only good things to say. And some of the things Miss A told us he can do I had no idea about! So sneaky kid, no more pretending you can’t do the puzzle yourself or that you refuse to try new foods. Apparently he’s quite the adventurous eater at school. Behavior wise, all is normal toddler, but he and his BFF do fight in a brotherly sort of way that is both frustrating and endearing (and gives me a glimpse of my future with real brother). Both sets of parents are of the mindset “unless there is blood let them figure it out” which they mostly do. *and yes we do step in before actual bloodshed, but that is the sentiment. 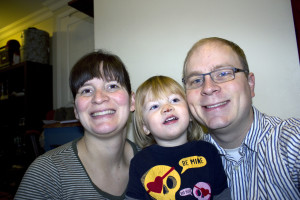 For me this six months was consumed with being pregnant with baby brother, but also was the time of the great weaning. We started just before he turned 2 in June and his last nursing was in October. It went as well as these things go and while I truly don’t think Simon was quite ready, I was. Mostly. He didn’t as the doctor assured me start eating a ton more, he did start drinking a ton of cow milk from a cup (and now that he knows about chocolate it’s all over). The process wasn’t traumatic and all is well. 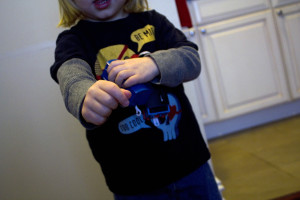 take a picture of my arm mama.

Otherwise eating is going better, and while it may be somewhat related to weaning much more is our approach. At the 2 year well visit we ran a bunch of tests just to make sure there wasn’t a medical or allergy issue and when all came back normal and we talked with school and the doctor Dr. C said “I think this is a behavior thing, not a food thing.” So we changed our approach – to what is was BEFORE the weight scare and following stress – back to we will decide what and when, you decide if and how much. Removing the battle at meal times and allowing him to choose his snacks helped. Also the promise of desert if he ate dinner. And by eat dinner it could be one bite of each thing because it’s new or a whole portion of something we know he likes. Most times desert was enough of a reminder, but there have definitely been times where he says all done, no desert, and goes to play trains until bed time. I was so proud on Tuesday when he tried the sloppy joe, which was much to spicy, and asked for toast and jelly instead. He got it. 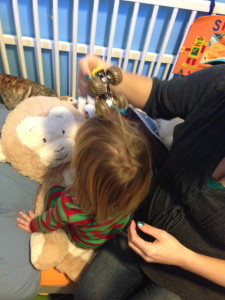 there’s a monster in my hair.

Parenting a toddler is exhausting at times. All the time? It’s not always easy. There are tantrums and whining and all the things that go along with the “terrible twos” but he’s so much fun. My mom commented on what an urban kid he is, because at 2.5 he can walk down the sidewalk by himself and knows to stop at the corner and wait to hold hands to cross with the “walking man.” And what kid has a melt down because we don’t have time to stop at [Grand] Central Station? He knows his subway trains. 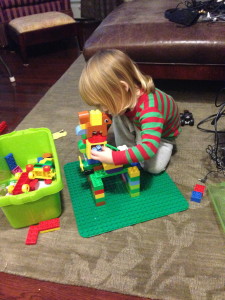 I love this kid so so much.