I know they say that the end of pregnancy drags on. I’m really waiting for that to kick in. I’d really like some of that feeling like I’m just waiting and waiting and waiting. Instead life is still barreling on. Every week I’m astounded that it’s Wednesday again. at 34 weeks I told someone I was 30 weeks along, then had to correct myself. The fact that I WILL have a baby in arms in the next 35 days blows. my. mind. 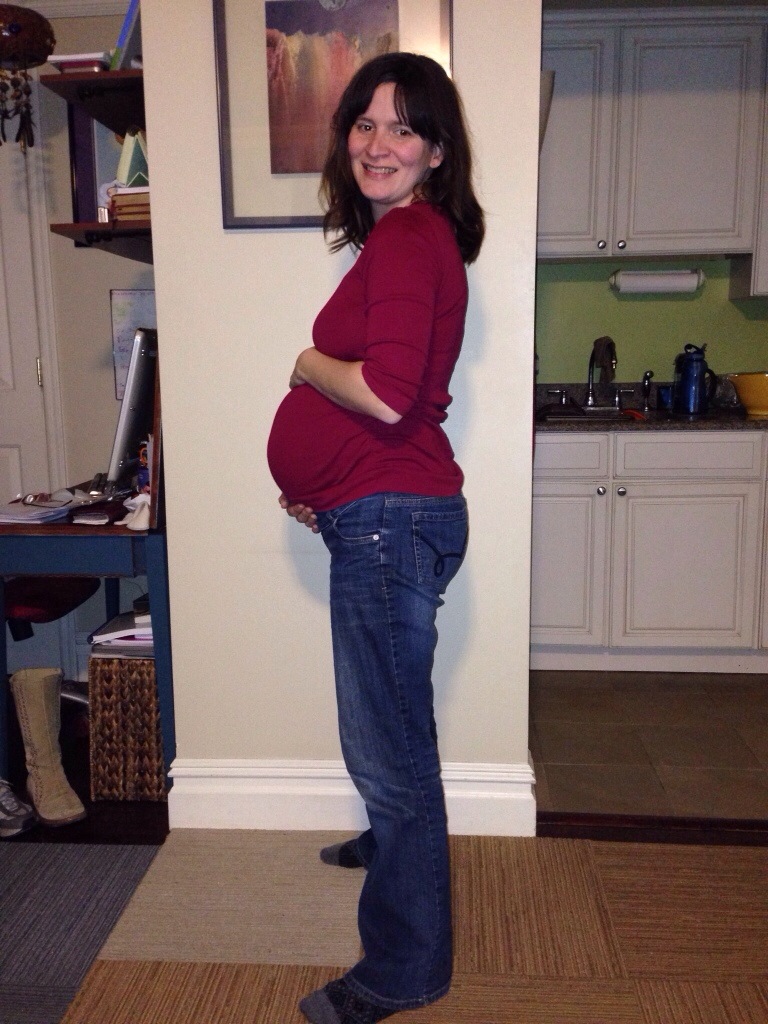 Physically I’m still doing ok. At my last check-in post I said I was feeling great. But that was written a few days before 30 weeks. From writing that post to the appointment with the midwife some moderate to severe back-pain set in. At 30 weeks words like “sciatica” and “physical therapy” were thrown out. We’ve since determined that it was strain, most likely caused by carrying a heavy backpack to Staten Island a few times a week and to any other meetings I went to. I’ve been wearing a belly support band / back brace thing that helps. Also, for the last few classes I carried only essentials to class – going so far as to leave my laptop home – and since the semester has ended I’m using the stroller instead of diaper bag if I’m out with Simon and carrying the smallest bag possible anywhere else. Luckily I’m able to pretty much keep myself house-bound if I need to right now. All this to say, my back is much better. Although the building of the “stairs bed” – I think Simon’s term for bunk bed will forever be used – pushed me over the edge the last couple of weeks. And all I did was hand Rob stuff or keep Simon occupied! (post on that tomorrow, promise) The exertion has caused the back pain to return which makes it hard to walk and causes nausea. But I’ll take mild pain every day over debilitating pain once a week. At my appointment yesterday the midwife said that if the bad pain comes back I need to call in immediately.

My weight gain plateaued at around +27-30 pounds after 32 weeks, it fluctuates. I’m happy with this, I know I’ll gain a bit more in the next month, but I’m on track for less than the 42 I gained with Simon. We are hoping for a slightly smaller baby to increase VBAC success chances – although a bigger baby isn’t necessarily a deal breaker. I’m eating pretty well and finally consistently taking a prenatal vitamin. THAT only took 8 months. I need to drink more water. 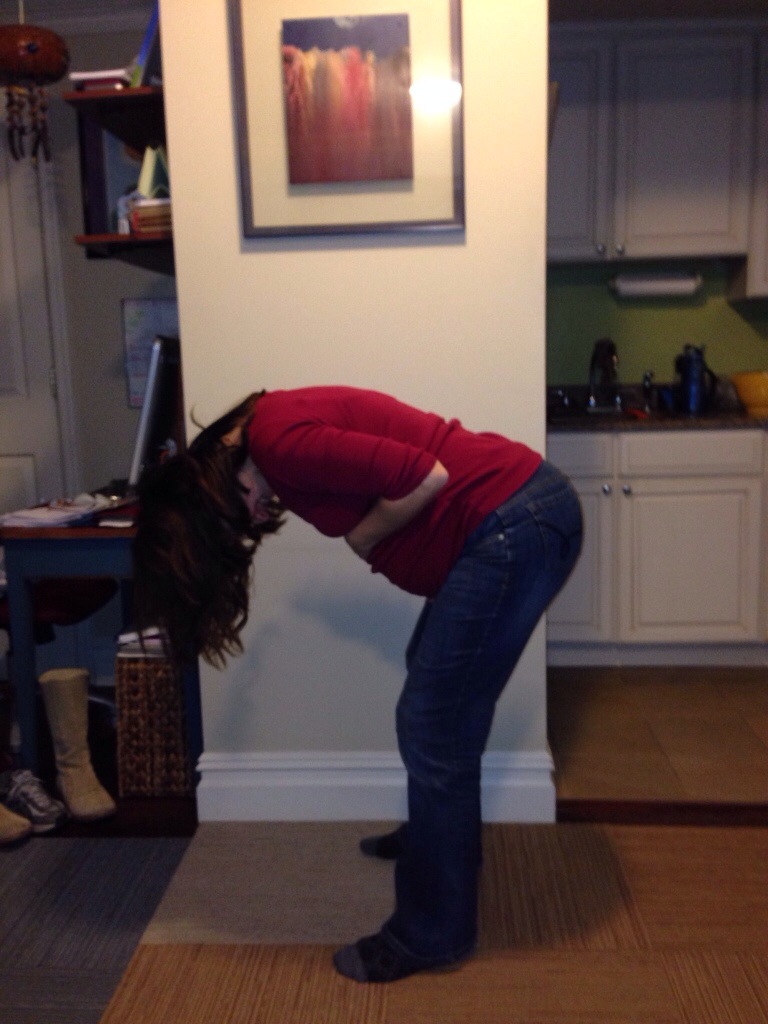 I’ve been listening to the Hypnobabies more consistently. I’m not sure how this will go when I’m in labor, but it definitely relaxes me now. I had a check-in meeting with our doula a couple of weeks ago. I still like her as much now as when we hired her. That’s good. Our BIG meeting is next weekend to discuss specifics as best we can. I talked with the midwife last week about hospital policies and procedures. The best news is that unless something is wrong they recommend laboring at home as long as possible (keeping in mind that second births tend to be faster than the first go-round). I was concerned they would want me to come in ASAP because of the VBAC. We went through some other questions I had and was told that everything is negotiable – but how much is dependent on how everything is going. And I was told it’s a good idea to bring a typed copy of my ideal preferences as a starting point. So I’m working on a birth preferences document. I have a few questions for the OB still about C-Section things if that becomes necessary. And I’ll go over it all with our doula in our meeting before finalizing. Mostly everything is looking good for a VBAC and it is really nice to be at an OB/midwife practice where the assumption is no intervention unless requested instead of the other way around. At every appointment now we are talking about labor signs and outlining different scenarios. 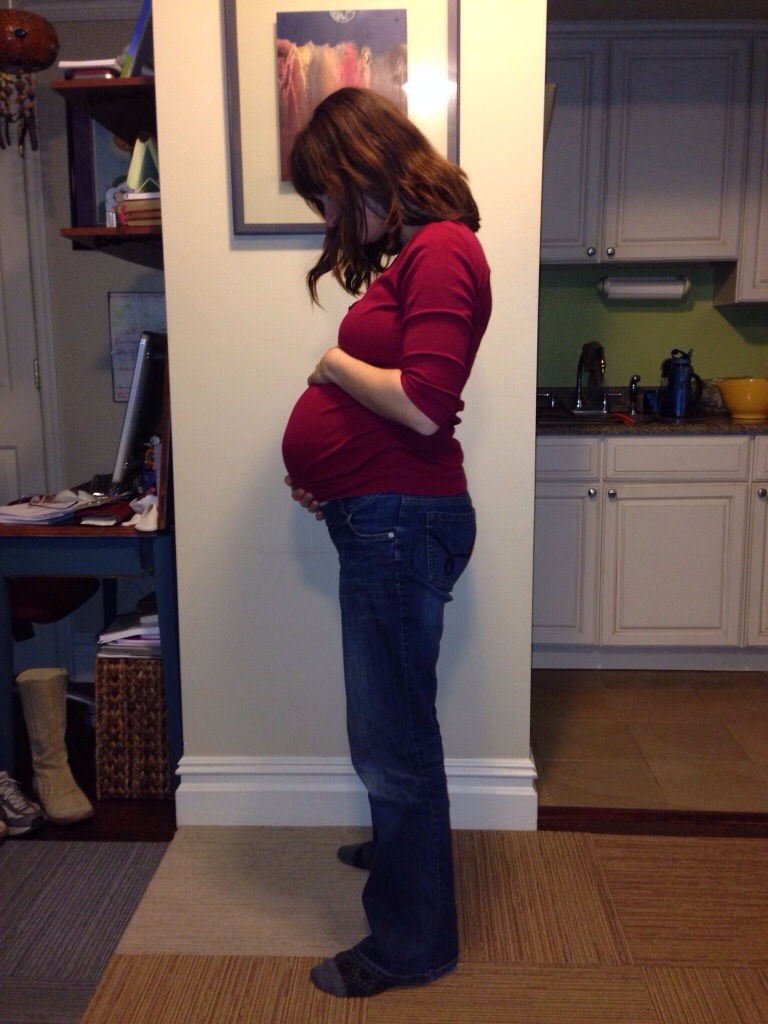 I’m in full nesting mode and this is also likely contributing to my over-doing it. But I really want to have everything “done” by 38 weeks. Partially because I’m a planner and partially because I don’t want a big to do list when I’m to huge to move.

As to my academic crisis, I’ve backed off of a lot and am down to two things I have to do and one that it would be really nice to do. I feel good about the pressure being gone. Although there is still quite a bit of work in these two “things.”

I think I’m ready for this baby and in the meantime soaking up the last few weeks of Simon as the only child. And I’ve decided that I WILL NOT go into labor before Feb 9 which is when Rob and Simon are going to Monster Truck Jam and I have a “spa day” planned to get a hair cut and my nails done. That’s at 38.5 weeks – so there is a pretty good chance baby boy will cooperate.

When Rob was taking these pictures I think we took about 100 because I couldn’t stop laughing or making weird faces. Enjoy the outtakes.

One thought on “36 weeks; the final push”