Behind the couch. This area has undergone many changes. In 2009 Rob used this as his “office” when his brother lived with us. Then when we moved the desk back to the office (turned kids room) Rob liked having the couch away from the wall because the surround sound was better. 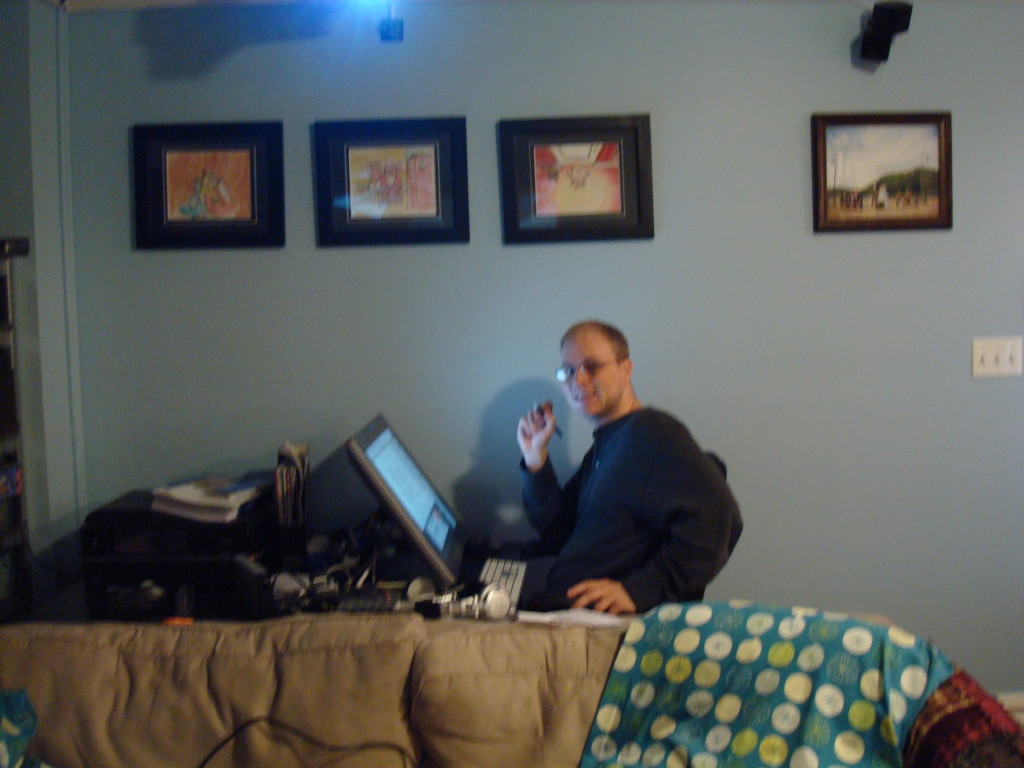 We bought a filing cabinet and put it behind the couch with the printer. At some point in 2011/2012 we moved the pinball table back there too. It was a place to hold stuff. 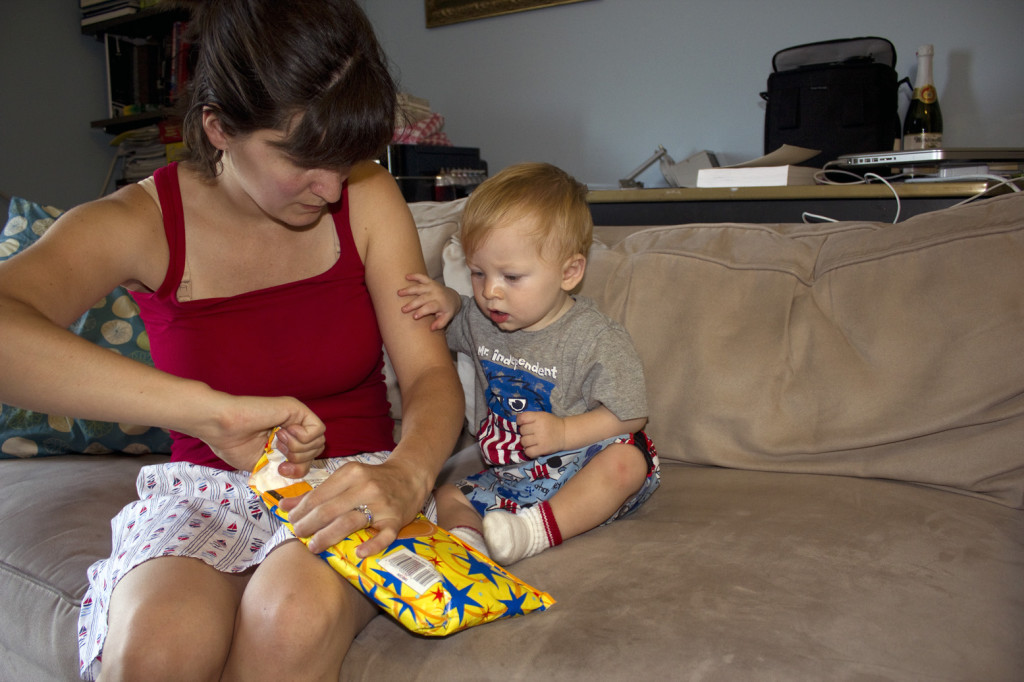 In early 2013 Rob got a tool box, a big one. This was great for holding tools, but not so great for the general chaos of our living room. 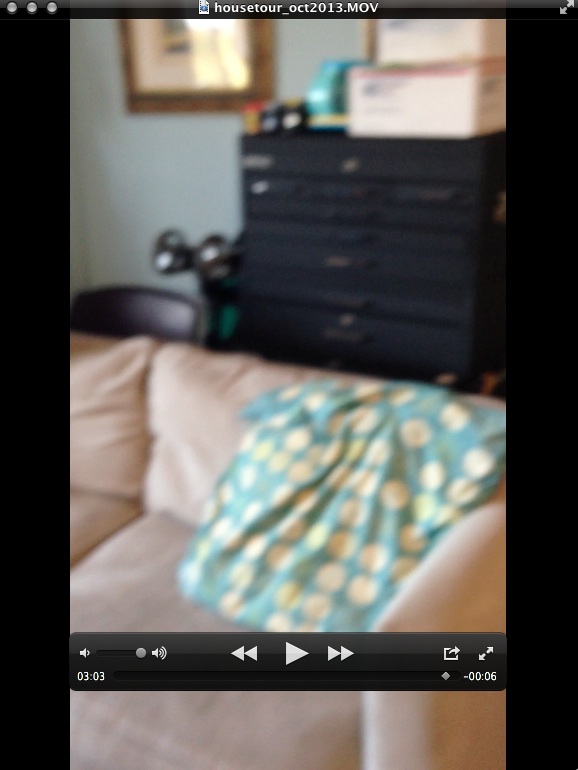 We also had the corner shelves to deal with. These hold the electronic equipment (compter, receiver, modem, 3D box, etc…) to run the projector / tv. That was easier to deal with because it was a lot of Rob purging things like old magazines and clearing space in the hall closet where I was able to move many of the books and also some boxes of old family photos and other sentimental things (which were on these shelves at one point). 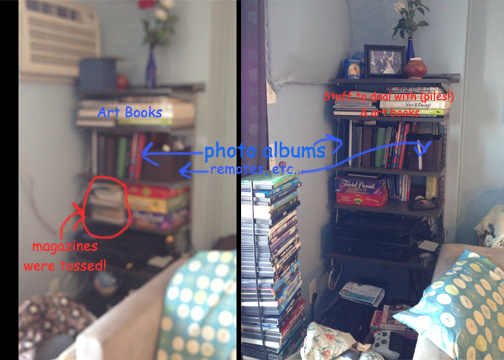 In the same move of things to the hall closet we finally took the time to put all of the tools in the tool box and move the top piece to the hall closet and put the file cabinet and the bottom piece behind the couch. At Christmas I covered these with a holiday tablecloth I had and it looked nice. When I took the Christmas decorations down, we weren’t sure what to do until Rob suggested using an old piece of plywood that had been leaning behind a door in the bathroom for a YEAR to lay across the two pieces to make them the same height. We used some extra wood from the be to level off the cabinets then wrapped the plywood in old fabric. And covered it with a lace table cloth from my grandma. This is a perfect use because the table cloth is ripped and stained and I wasn’t really sure why I took it other than I had one shot to go through grandma’s house last winter and take anything I might want. So I’m glad to have this use for it. It has been a process though.

More with the piles! Gah! Just wait until my post about what happened to these. To the right is currently one of our suitcases and our strollers – we have a big one and a small one. Caleb’s carseat will eventually be here, but there are some puzzle pieces to be worked out in the jigsaw of our home. I am pleased to say that with my highly inefficient way to deal with the piles and one last run to the container store that this was completed to a satisfactory level BEFORE Caleb arrived. This is the after. 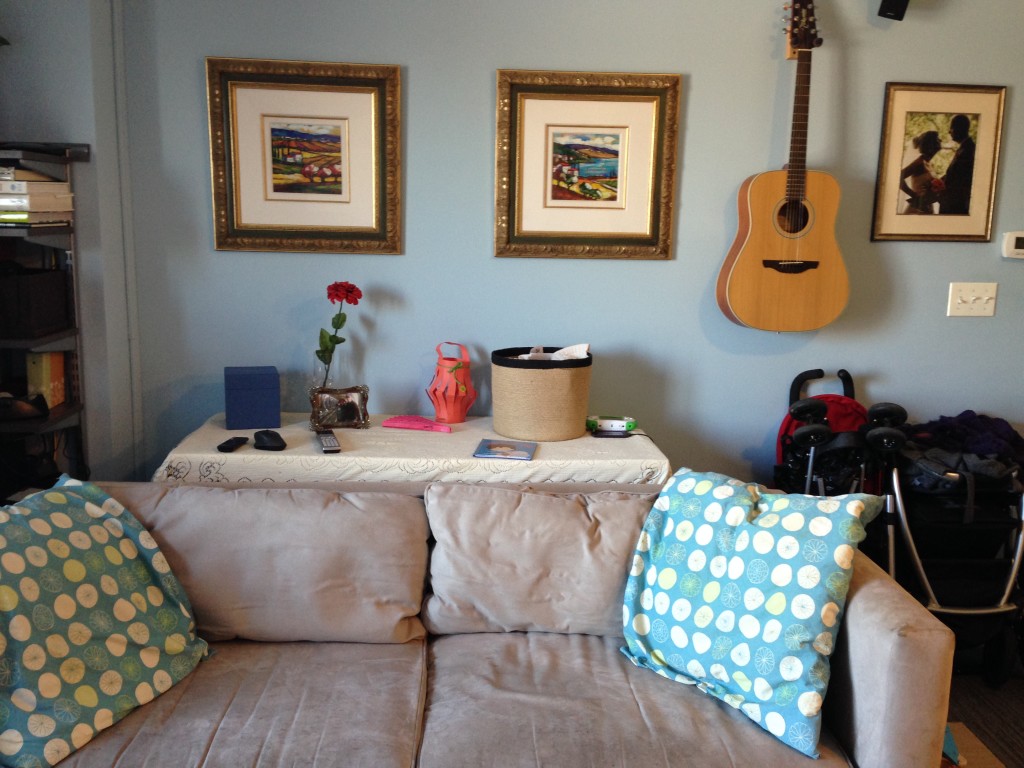 The basket holds burp clothes and extra wipes because…yeah… Someday I see it as a place to hold a few toys in the living room. My ipad and phone pretty much live on this new table now that I spend a lot of time on the couch. I ran the chargers up behind the basket so they are easy to tuck away. And since we don’t have a coffee table we have a place to put cups while watching tv! Oh, and notice the guitar hanging on the wall. I finally bought a wall mount thinking that if it is readily available it will be played more often than when stored in a closet. The file drawers can be opened easily by moving the strollers – I MUST deal with these soon as there is much to be trashed and much to be filed (piles again). The tool box requires a bit more maneuvering, but it works.

I think there are only two areas left to reveal before my final video, the kid’s room and the second bathroom (my nemesis which will NEVER be to where I want it I fear). Also, after the reveal I know that our home is a constant work in progress as needs change and kids grow. I do feel like I am close to the organization I need to live functionally for the next few years. And I know what I’m doing for March’s #whoneedsit? theme of PAPER. I will photograph the piles and start to deal with them.