We had a great vacation last week and one perk of renting a house instead of a hotel room was the laundry. For those of you who have houses with laundry machines this probably sounds a little crazy, but the ability to wash things throughout the week was awesome. The perk was coming home with a suitcase full of clean clothes instead of dirty. So unpacking was just unpacking with no laundry to do first.

As I was unpacking I decided I might as well just empty my dresser drawers because I had everything I wear often out already. Then if I was doing the dresser I might as well do the closets too. Even Rob got in on the action. Our bedroom looked like this. 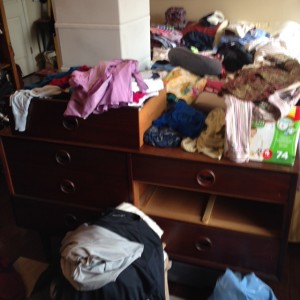 Now though I have two mostly organized closets, a dresser where I can actually open and close the drawers and a huge bag of store/donate/recycle to sort that I will deal with as soon as my dissertation proposal is turned in. In a way the cleaning and purging was procrastination. But in another is was clearing the clutter so I could work in peace. We live in a small apartment with too much stuff. I do a pretty good job of keeping our main living areas picked up and organized (we won’t talk about the pile of toys that gets shoveled out of the way in the kids room most nights) but there is a lot of hidden clutter. Until I’m in the midst of clearing it out it’s hard to see how this hidden clutter also clutters my mind. So clean closets and ready to write.