Yesterday was a day date! I’m so glad it’s warm and we’re doing this again. We only went on one in the first three months of this year. Day dates are when we spend the whole day out together and not doing errands etc.

Bank of America has this great program of offering free admission to museums and attractions the first weekend of each month if you show your BoA card. (Thanks Sarah for this tip) So we finally made it to the New York Hall of Science. Rob has been wanting to check it out for ages, and the one time we tried to go last year, I didn’t check online first and it was closed.

It’s a fun museum, and it’s not just for kids (there are two designated pre-school areas). Although except for a group of teens we may have been the only adults sans kids. It’s a museum all about discovery. There is a ton of learning to be done when reading the panels. Our favorite area was the lights and vision part. There were all these lights and mirrors and prisms to play with. Here we are on the anti-gravity mirror. 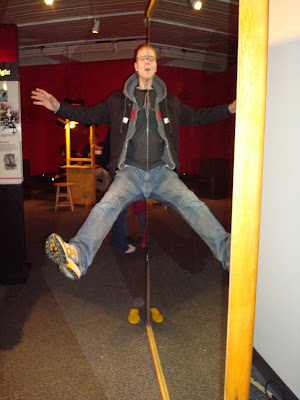 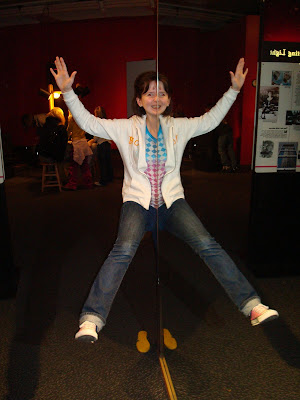 Then there was the biology section. The amount of grossness of every surface is pretty disgusting. I will continue my current train of thought which is to wash my hands often and try not to think about it too much. But this was pretty cool. It’s a heat sensory monitor. So you can see which areas of your body emit the most heat. I opened my mouth to get more contrast. The picture doesn’t really do it justice.

The last section we went to was the about how we move. There was a batting cage where you could throw different types of balls and see how fast you went. I threw the baseball at 30 mph as my top speed. I didn’t do so well with the tennis ball. There were dragsters where it tested your reaction time in hundredths of a second on how fast you hit the gas after go. I did it once at 1! Go me, but averaged around 9. Rob got down to 9, but averaged a little higher. This was one of the areas that were crawling with kids, but most were just having a good time. The kid in the dragster next to me was having a great time just pushing the pedal, he had no idea what the purpose was, and was therefore uninterested in who won. Despite an annoying parent – who I think thought we (as adults without kids) just really shouldn’t be there – we had a fun time.

We then went to lunch at Cheeburger Cheeburger in Forest Hills, and walked around this very suburban feeling neighborhood. When Rob said there were houses, he meant HOUSES. There is some great shopping here. I think exploring the neighborhoods of Queens is going on the summer to do list.

And now for the jazz. My friend Luke, from college had his masters jazz recital last night. So we went up to Broadway and 122nd street for that. Here is where I’m a little dumb. We got on the 2 train to go express and then transfer to the 1. But then I saw 116th street (our stop) on the 2 and thought that I had it wrong and we didn’t need to transfer. So we stayed on the 2. What I didn’t realize is that the 1 /2 split is at 96th street and the 116th we got off at was on the wrong side of the island. We had a very nice walk through Harlem, up the crazy stairs to Columbia, and through the campus to Broadway. Where the 1 train was, and then a quick walk up to the recital hall. It was all original composition. And reminded me how much I really do like jazz.

3 thoughts on “Science and all that Jazz”