***The first two days were great. Then we all caught a stomach virus. It was gross.***

Today is Simon’s first day of daycare, or school as I might refer to it. School just sounds nicer to me.  There will be new teachers and friends to meet. In as much as you can learn and make friends at 6 months old, because he is almost 6 months old. When did that happen?

At first I thought we’d never be able to afford daycare, then I found out that a part time nanny would cost more than full time daycare – not at all places, but for the two we looked at.  We visited two centers and one in home daycare.  The in home situation didn’t feel right for Rob or I.  Both centers were nice.  One was cheaper, but a bus or subway ride away.  The one we chose is about 10 blocks away.  Simon will go Tuesday – Thursday for this semester.  In the summer I’ll probably keep it at 3 days, but change them up, so there will be a break in the 3 days.  In the fall we’ll evaluate if we want to send him full time.  I like that my schedule is flexible enough that I still get to be with Simon 2 days and the weekends. But I’m really, really excited about what it will mean to know he’s somewhere where he is taken care of and I don’t have to worry.

The last five months have been difficult. I do not regret that we juggled schedules and that Rob was able to stay home. Rob doesn’t either.  But it was tough at times.  And on the days I was away, I was always wanting to rush home even though I had a ton of work to relieve Rob. And when I was with Simon it was really hard to just “be” with him and not think about all the work I needed to do, but couldn’t. I kind of hate how much I don’t want to be with Simon all the time. But I want to use the separation productively.  And then really make the time I do have with him count.

Simon isn’t exclusively breast fed, but he would like to be. On the days I’m away I pump – oh I hate the pump – and we try bottles. On a good day he’ll eat 5 ounces (about half of what he should be eating) but usually less.  This is one reason we are not sleep training.  If he’s actually hungry I will feed him, if he hasn’t eaten all day, I can only assume he’s hungry. Here’s hoping daycare can fix the bottle aversion. He is fascinated by the sippy cup, but hasn’t quite figures it out.  I got him a straw cup, score, he sucked out a bit of water, so in went the breast milk, and no dice. Oh, how this baby and his eating habits frustrate me.  We started him on a bit of food this month. It’s earlier than I originally planned, but he LOVES it so much.  If it’s on my plate he wants it now. And he’ll pull a spoon out of my hand, but he can’t feed himself yet obviously. For the first month of daycare he’s bottles only because I don’t want him to fill up on what should be food to experiment with rather than milk, which is the primary nutrition. We’ll see how it goes. They will provide all food though, which is nice.

The center is also willing to use cloth diapers.  This excites me because it means not having to spend money on disposables.  The state regulations state that diapers must be one piece so they can’t use the pre-folds and covers we favor.  But gDiapers with the cloth inserts are fine, as are our BumGenius (which are our overnight diapers). We got some FuzziBunz for Christmas and some Fancy Pants.  I don’t love gDiapers as they tend to leak.  If one of the other brands really works then I think I may sell those as well as a few others that we don’t love and buy a few more of what we like. It’s a little thing, but it makes me happy they will accommodate.

I’m looking forward to this. I’m not worried, but I’m sure I will spend most of the day checking my phone every 10 minutes making sure there are no calls. One upside of starting in January rather than February (that’s when the spot was open) is that I am working from home for the most part so there will be a nice transition period where I am close by.  Everything will be fine as we enter this next stage where Rob has full time employment, I have a structure I better stick to in order to get all the school stuff I need to do done, and Simon is starting school, it’s exciting. 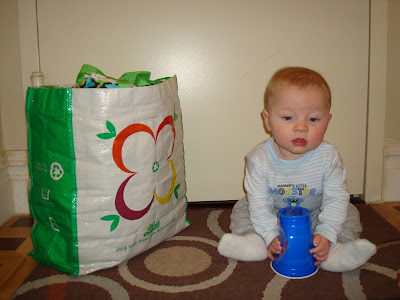