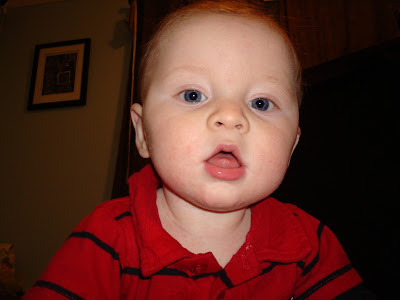 How has it already been six months? It’s gone by so fast, yet it seems like it’s been forever. Today is Simon’s half-birthday. He’s getting oh, so big. This last month has been huge in terms of development. 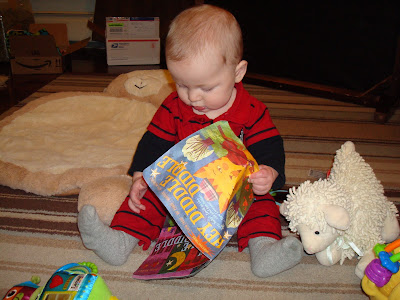 Just after Christmas, so at 5.5 months he went from not sitting at all to sitting with no support.  Today he went to work in the lab (he’s a research subject at my school) and he sat for more than 30 minutes doing different tasks. He’s also started to realize that he CAN move to get the things he wants. Now he just has to figure out how to do it. He’s been able to roll from both belly-to-back and back-to-belly since mid-October, just choosing not to. Until this month when he will roll to get that toy that is just out of reach. And he’s started to spin on his belly to change directions.  This works out well for my surround the edge of the blanket with toys to keep him distracted while I do XYZ trick. And then just today on his half birthday Simon tried to rock up to his hands and knees.  He will be crawling in the next four weeks, I’m almost positive. 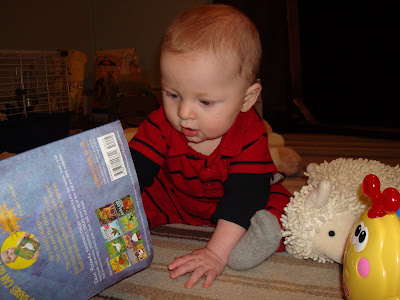 Simon also discovered the rabbit this month. If he’s fussing and sees the rabbit he gets very calm and quiet and just stares and reaches. He still loves to stand.  And he’s quite good at balancing holding on to the rabbit’s cage. I think Mr. Theodore Monkey will also end up being good incentive for crawling as Mr. Simon really really wants to get to him. 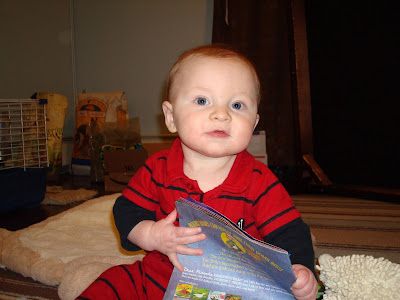 We did an early introduction to solids. I wasn’t really planning on this, but Simon is really interested in our food.  He’s at the “if you have it I want it now and I don’t care what it is” phase. Especially when it comes to food. Peas and beans and apples are favorites. And pizza. Yesterday I left him suck on my crust with some tomato sauce on it. Wow, that was funny to watch. Bottles are still a nemesis.  But I’m starting to be ok with the fact that this is more my problem (psychologically) than an actual problem. I’m still feeding over night, so if Simon wants to wait to nurse, I can be ok with this. I think.  He’s really fascinated with cups and his sippy and straw cups.  Both of which he CAN drink from. But only if there is water (my test liquid in very very small amounts). The second I put milk in there, no way. At least he loves food. 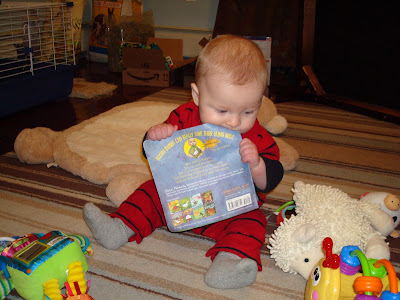 Sleep is still a learning process. Our lives and schedules have all been changing over the last couple of months. We bed-share more than I ever thought we would. Most nights Simon starts out in his crib and depending on how tired I am or how many times he wakes up he ends up in bed with me.  Or sometimes he and I sleep on the couch from around 3. And on really cranky nights we just sleep in the big bed from the start. Other nights he stays in his crib all night (except for the eating). I’m really mostly ok with the status quo. Getting up once or twice (generally 3 and 5/6ish) at night really isn’t bad, especially since that second time is technically an acceptable morning wake-up. It’s the nights or weeks where it’s 5+ times that are trying.  Sleep training in some form may still happen, but for now we will nurse at night to make up for the lack of bottles.  Ask me again at 7 months how I feel. 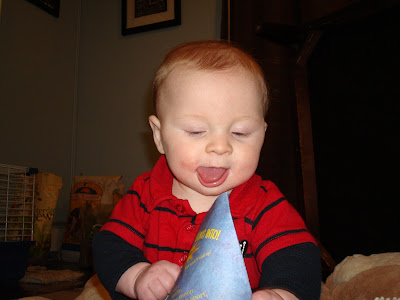 4 thoughts on “Half a Year”