This is a little late getting posted, but here we go. 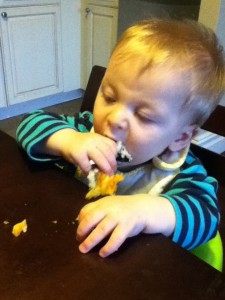 From 9 – 10 months it was a lot of little changes on the way to big milestones. Still only two teeth, but I’m getting better at letting go about the mess of self-feeding, so more opportunities to try new food. I think he likes food, but definitely prefers nursing. Most of the food ends up on the floor, but we’re getting there. I do think it important to eat at the table together, so if we eat dinner at a decent hour, Simon sits at the table with us. He’s still in the Bumbo seat, but since he can climb out of it and I’m afraid he will hurt himself getting a leg caught, I ordered a booster seat. So big! 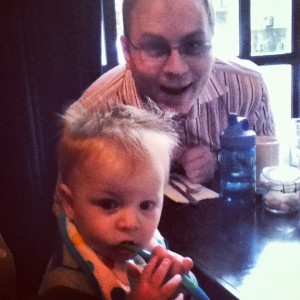 Wanting to walk all. the. time. except that he can’t. Or won’t alone yet. But he’s gone from cruising with two hands to using only one. The other hand is usually holding some toy. Occasionally the toy is so intriguing that he uses two hands and balances without holding on for a bit. He’s also quite good at walking when holding only one of my hands. At school (or play dates) he will use pretty much any tallish toy, like a cash register, as a walker to move around. On his 10 month birthday he took two steps. Any day now. 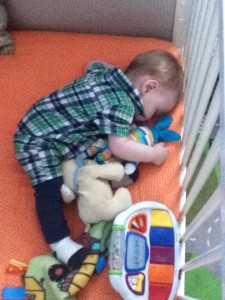 Lots and lots of babbling and some imitating but no words yet. Sleep is getting better. We are getting a pretty consistent 7-8 hour stretch. And then it all falls apart. It’s a work in progress. But Simon is now reliably taking 10 – 12 ounces a day by bottle (up from 8-10) so I’m hoping this means he can stop the reverse cycle of needing to eat all night. 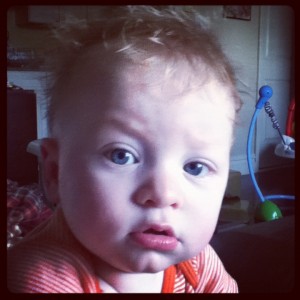 In addition to falling in love with the playground, he has discovered “outside.” A surefire way to end the cranky is to open the door and step out to the balcony. He’s also discovered dirt. I kind of think he might be saying dirt. He repeats “dut dut dut” after me. He loves to dig in my pots (I try to stop this) and drop the dirt on the ground. Or eat it. I try to stop this too. He is not fond of grass though. 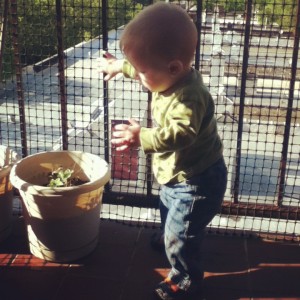 I can’t believe we are staring to plan his first birthday.