Sunday we took Simon to Coney Island. He’s been before, but now he’s big enough to have some idea of what is going on. First we stopped at Nathan’s for corn dogs and cheese fries – Yum! 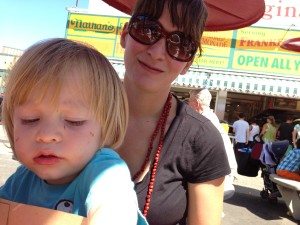 Then we headed to the aquarium, which reopened recently after Hurricane Sandy. We saw the sea lion show, which Simon would have watched for much longer than the 15 minutes it lasted, then looked at the walrus and some fish. Pretty quick trip since they are still rebuilding. 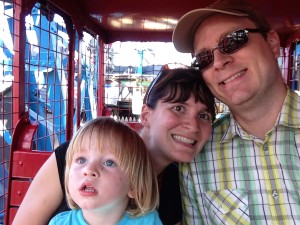 Then we headed to the boardwalk for the Wonder Wheel. Rob and I rode this on one of our first dates. What makes it really cool – besides that fact that it is old – is that most of the cars are on tracks. In addition to going round and round, the cars swing out on the tracks like a mini coaster 100 feet up. So of course we took Simon. He was really excited at first…then we started moving. The first swing down was a bit terrifying – for me too since there is always that oh s*** moment when I question my sanity at riding a 100 year old ride. Then it was fun. When we got off Simon wanted “more swinging car on the big wheel” Success!