Last week the artwork we bought back in just arrive.  Two big brown boxes.  We opened them to make sure they were the right pieces and that the glass wasn’t broken.  They were and it wasn’t and the boxes were placed against the wall. 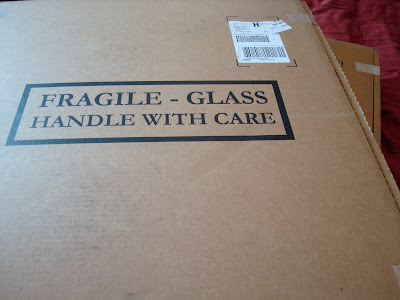 As we really don’t want to be those people who place art/frames against the wall and never hang them, today we did some redecorating.  The chosen wall is the one behind the couch. it’s the last picture in this post and Robs desk is now happily residing in the office, which you will likely never see on this blog as it doubles as a storage room.  I”m slowly working on that.

First we had to take down the animation cells that were the previous decoration.  And patch and paint the holes.  I also use this opportunity to touch up a few other places around the apartment.  Such a nice blank wall.  We measured and hammered and got ready to hang our new art. 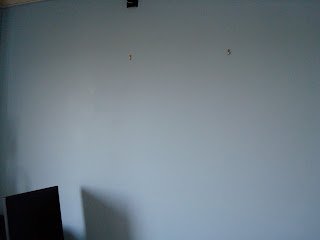 The two paintings are by Slava Brodinsky, a Russian painter who moved to Isreal and much of his work is inspired by the Medeteranean, like the South of France where we visited.  I think that is one reason we liked these so much was that they reminded us of France.  The paintings are serigraphs on wood with hand painted embellishments (really if I didn’t know there is enough texture that they could be originals, which I guess they kind of are because of the hand painting) and are each from a series of 180.

After the hanging was done we though the wall looked pretty good.  Especially if you only look at the part of the wall over the couch.  But there is more wall that extends to the hall, where we had hanging a wedding photo (see before post linked above).  But it looked all wrong.  It was too small and the frame was all wrong. 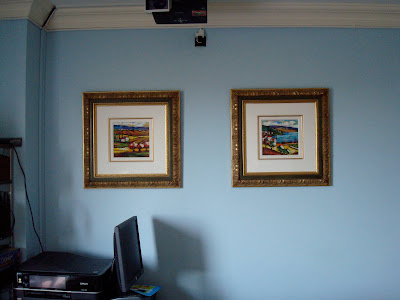 So we swapped out the too small photo with one from our bedroom, which is actually the same size but the frame is bigger because of the matting.  The new frame is gold, so it looks kind of perfect. 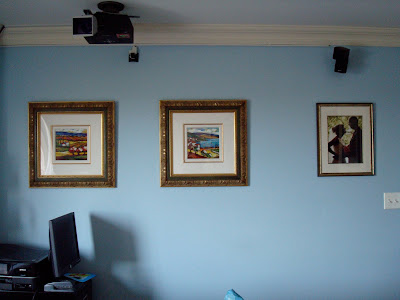 All that is left to do is decide if that monitor is going to stay there or go back to school from which I borrowed it for my online summer math class.  Rob said that the quality of our art investments is going up.  It is, but now we have to figure out what to do with the cells that used to hang here.  Maybe we will be those people with frames against the wall after all…