Saturday Rob and I talked our friends Bill and Jessica (who have a van) into driving up to the Stormville Flea Market with us.  We are lucky to have friends who enjoy flea markets and antiques as much as we do.  It is a pretty awesome place.  Miles of antiques and items that fall into the “what do people need with all this crap” category.  At first we were in the “street fair” section, meaning t-shirts, dresses, candles, all the stuff that you find at any street fair in the city.  Here we scored a couple of DVDs that we have been wanting to watch but not actually pay for, Space Balls ($8) and X-Men 3 ($2).  Jess picked up a kitchen strainer.  But we knew there was something better out there.  But first we had to eat.  The food was pretty good.  Standard fair food, although I think they could have done with some more fried dough and less around the world (noodles, greek, etc…) but that is just my opinion.  Then we found the fun stuff. 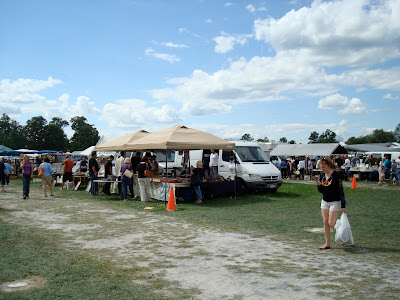 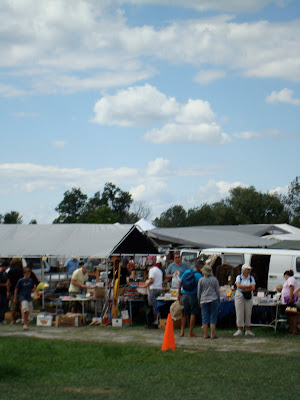 Everything you never knew you needed.  Lot’s of jewelery and furniture and old kids toys.  I am still looking for the perfect small dresser or cabinet to store towels and sheets.  Someday.  Rob and Bill spent way to much time looking at action figures and old video games systems and games.  It was decided that you could totally start a sword collection here.  Why?  I think it’s a guy thing.  I have the question, vintage kids toys: fun or deathtrap?  I mean have you seen the old metal cars, wagons, and tricycles?  (Here is when I am really wishing I had taken more pictures of the day).  Four hours and several miles later, Jess scored a pyrex casserole dish for $1 and I got some napkin rings, which I was on the lookout for.
Ever since I read this post on SouleMama’s blog (read part 1 here)  I knew I needed some nice napkin rings for our table.  Rob and I do use cloth napkins always, and most days actually do eat at a table either indoors or out.  I thought that if we have unique napkin rings, we can keep track of whose napkin belong to whom. who’s napkins belongs to who. (writing that sentence it seems so wrong, but saying it aloud it comes out ok) (*updated: it’s great to have a former English teacher as a Mom.)  I found a set of 4 for $6 early in the day.  I bought them and kept my eyes open, because really 8 would be perfect.  I found one that was cheap looking and I just didn’t like it.  The only other napkin rings were from the 50’s made of some kind of resin all in the shape of animals.  They were actually very cool and there was a variety of colors and animals, but at $45 a piece, I easily passed.
The flea market was awesome,  I for sure want to go back next year.  Who knows what will be on my list then, but I will try and take pictures.  I was proud of myself for showing restraint in not buying the cute vintage table cloth that was overpriced (if it is more than I am willing to pay it is over priced, even though it was a fair price) and the one that wasn’t but didn’t match any of the decor I already own.  There is always next year.
And now for my napkin rings.  That will be in use until I find something I like better. 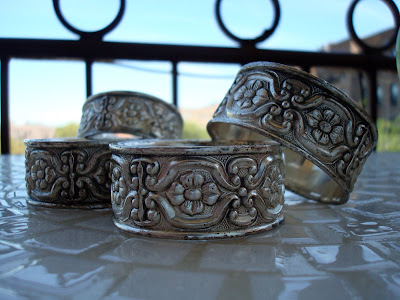 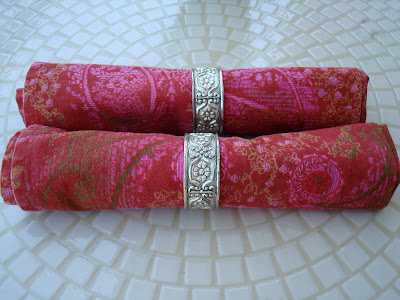 One thought on “Flea Market Fun”